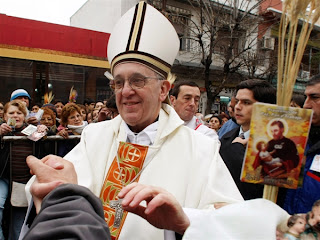 The new pope is a puzzle to nearly everybody, particularly to the politicians, pundits and other know-it-alls. He looks and sounds like a remnant of a previous time, thrown up in the squalid swamp of a trashy and superficial age. He’s not at all hip and “with it.” He’s not interested in “moving forward,” as in the current cliche. He projects humility and kindness and speaks of his Christian faith as if he really believes in the amazing grace of the Gospel. This makes the intellectual elites, and even some “holy men” of the various bureaucracies of modern Christendom, incredulous, nervous and embarrassed.
The elites are willing to tolerate religious faith as long as a believing Christian keeps it to himself and never acts on it or even talks about it. It’s OK, barely, to be a “cultural Christian,” who often isn’t really a Christian at all as Christ defined the faith in the New Testament. The new pope rebukes this synthetic Christianity, urging a return to “the Christ of the Cross” who came to redeem humankind with a sacrificial death on Calvary. This puts Pope Francis clearly at odds with cultural Christians who would reduce the faith of our fathers to a catechism lifted from the pages of The New York Times.
“I don’t think he’s what we need right now in the Catholic Church,” Madeline Cuomo, the sister of the current governor of New York and member of a powerful family with a lot of the vowels in their name that Daddy Cuomo imagined kept him out of the White House, tells Crain’s New York Business magazine. “We’re looking to move the Church forward, with gay marriage and women priests. He’s going to turn back the clock.”
Her father, Mario Cuomo, a former governor himself, offers more unsolicited advice for the new pope, with an avuncular pat on the head: “The way he’s lived has been simple and admirable, but it has not taught him how to deal with the high pressure of huge problems in the Church … The whole question of women, the question of marriage — not even the question of same-sex marriage, which is a recent development — but the whole idea of priests not being allowed to be married. That’s led to a lot of unhappy relationships and ugly relationships by people who are basically sick. That’s something this new pope will have to deal with.”
And he had better deal with it at once, and deal with it in the “forward” way that will please those for whom the Cuomos, pere and fille, speak.
Women, wedding bells and furtive sex are much on the mind of the new pope’s critics and tutors. Some of them obviously expected a lady, perhaps someone nominated by the National Organization for Women, to succeed Benedict XVI. (Hillary Rodham Clinton was currently between engagements, and as a Methodist she could have been a two-fer, a bow not only to feminism but to the spirit of ecumenical sisterhood.)
The media, big and little, insist on running everything through the filter of the modern, the secular and the political. The Associated Press, perhaps being deliberately provocative, suggests that the election of Francis might have been, if not illegal, at least offensive to “international standards for the election of a world leader.”
The Associated Press man at the State Department asked the department spokeswoman whether she “thinks the election of the pope was OK. [Does it meet] the free and fairness standard? No, I’m curious. I mean, and with all due respect. I’m not accusing the Vatican of doing anything improper, but you seem to take issue with theocracies in places like Iran, and you celebrate the theocracy in the Vatican.” This exchange followed:
The State Department flack: “He is the head of the [Catholic] Church.”
The reporter persisted: “Is it then correct that the United States does not take a position on whether the election of the pope was free and fair and transparent? Without universal suffrage …”
The State Department spokesman, after further research, returned to the podium to say that since the government regards Vatican City a sovereign juridical state, if a request from the international organization monitoring elections were to “come forward, we would take it very seriously.”
The question was hardly off the wall, whence come so many press questions. President Harry S. Truman, a Baptist, tried to recognize the Vatican just after World War II, but outraged objections on First Amendment grounds from Protestants and others prevailed. Religion and the Constitution were taken more seriously then. Ronald Reagan succeeded in 1985, and the U.S. has since recognized the Catholic Church as its diplomatic equal.
Odd, but true.
• Wesley Pruden is editor emeritus of The Washington Times.