The Unimportance of
the Gay Marriage Issue

Before committing Marriage Gay People should take pause
And consider the implications of Community Property Laws.

Lust may achieve satiety
With or without propriety,
So why become a martyr
To receive the imprimatur
Of a dull Bourgeois society
Whose strictures you flee gleefully?

Intimate relationships of each and every kind
Are blithely entered into by mad persons love made blind.
The stress and strain of living close together every day
Demands incessant giving causing tempers soon to fray.

The quest to reach Equality considers not, of course,
The Agony -- and vast Expense -- that comes with a Divorce!
~ FreeThinke- 4/2/13 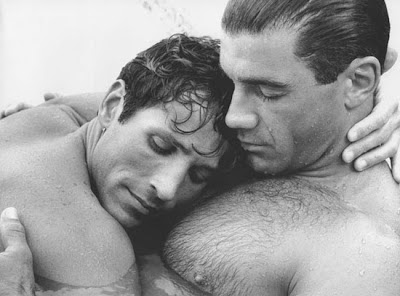 "For the Republicans to regain the Congress they are going to have to wake up and smell the coffee. Social issues are emotional weapons that the Democrats use to obscure the fact that they haven't one good idea on how to save our economy.”

Announcements by potential 2016 candidates, Hillary Clinton and Rob Portman, that they now approve of gay marriage made headlines as predicted. Never once discussed, however, by advocates is how this issue has anything to do with the economic state of the nation today. Legalizing gay marriage will not improve the economy nor is it really that important to the average homosexual.

Celebrity nuptials and endorsements may garner news coverage stressing it as a civil rights issue but ironically these come from a wealthier than average demographic. The average homosexual has concerns that are much more aligned with the general population –– jobs.

Nor will the laws allowing same-sex marriage impact our national security so why is it even being discussed as a potential hot-button issue for conservatives? Why are we seeing more and more articles on the discord in the GOP between the social conservatives and the moderates?

For the Republicans to regain the Congress they are going to have to wake up and smell the coffee. Social issues are emotional weapons that the Democrats use to obscure the fact that they haven't one good idea on how to save our economy.

The Republicans have to shout in unison the words that Hillary Rodham Clinton shouted when she was asked about the dead Americans in Benghazi: "What difference does it make?"

The media didn't hammer her about this callous response but of course they will go after all the Republican candidates tooth and nail so they have to learn right now how to deal with the lapdogs.

When the GOP candidates are asked what their positions are on the hot social issues like same-sex marriage, contraception and abortion, they should fire right back with the questions:

• What does that have to do with saving our country?

• How are these issues affecting the economy?

• Why aren't you concerned with that and our national security?

• Why aren't you more interested in closing the borders to terrorists?

• Why are you ignoring the continual threat against us by radical Islamists?

• Why aren't you wondering why the State Department didn't respond to Ambassador Stevens' request for additional security before he was brutally attacked and murdered?

If you want to know our positions on social issues, read the party's platform. We are all pro-life and for the sanctity of traditional marriage. That's all you need to know. Now for once ask me an intelligent and pertinent question."

Okay, it's unlikely we'll ever have a candidate that can put the media lapdogs in their place. It seems that when we do have someone worthy like that, fate seems to remove them from the running. I still have my Fred Thompson for President button from 2008 and will always remember how he refused to raise his hand as a debate moderator asked the candidates about global warming. Mitt Romney and John McCain were among those who hastily pulled their hands back down after Thompson told the moderator, "I am not doing hand shows today."

When asked by ABC News' Christine Byun why he refused, he answered, "I just decided that I wasn't going to engage in any of this monkey business that they like to engage us on sometimes - making us look like trained monkeys reaching for peanut or something ... 30 seconds is brief enough and when they try to reduce your answer to just a hand raise - I 'aint going to play that game."

What a superb candidate Thompson would have made but alas, he dropped out and the only time I see him now is on television shilling for reverse mortgages. The ability to hush up the mainstream media should be a desirable skill for the next Republican nominee because it is the media that decides what the important issues for debate and these will always favor the Democrat.

... and so the propaganda begins and the GOP falls for it all over again. Last week Time magazine asks, "Why Republicans Are Saying 'I Do' to Gay Marriage." In the article, Zeke Miller writes, "Will the next Republican nominee for President support gay marriage? It is a question that was unthinkable years ago, but amid a rapid shift in public opinion and demographics, it is being seriously considered in GOP circles."

According to Mr. Miller, "Republican National Committee Chairman Reince Priebus supported Portman's decision to change his mind on gay marriage when asked how the party will try to reach out to gays and young voters into the fold, saying it was no different than embracing the so-called Liberty movement championed by Senator Rand Paul. "I think Senator Portman made some pretty big inroads last week," Priebus told reporters. "I think it's about being decent. I think it's about dignity and respect, that nobody deserves to have their dignity diminished, or people don't deserve to be disrespected."

One more reason to get rid of the RNC chairman who ignores the fact that just six months ago, the Republican platform ratified its 2012 platform at the Republican Convention including a reaffirmation of its call for a marriage amendment to the Constitution and a defense of the Boy Scouts of America for banning gay scouts and troop leaders. "We applaud the citizens of the majority of states which have enshrined in their constitutions the traditional concept of marriage, and we support the campaigns under way in several other states to do so," the platform states. "We condemn the hate campaigns, threats of violence, and vandalism by proponents of same-sex marriage against advocates of traditional marriage and call for a federal investigation in to attempts to deny religious believers their civil rights."

The truth that the media is covering up is the very real hatred and violence demonstrated by the advocates of same-sex marriage. My nephew and his longtime partner were shocked at the obscenities and threats sent to me when I defended the Boys Scouts of America. However, I received just as much supportive correspondence from gays who apologized for the militants' inexcusable behavior and insisted that they do not represent the majority of homosexuals. In fact, many tell me that they have no interest in legalizing their relationships. Civil unions address most of their legal concerns in longtime relationships. The gay marriage hype is all about flouting the influence of religious institutions.

Nevertheless, more and more media coverage is being given to groundbreaking announcements from liberal organizations such as the American Academy of Pediatrics' new policy, citing research showing that the parents' sexual orientation has no effect on a child's development and is now for gay marriage. Hollywood chimed in with, "The Kids are all Right" with heterosexuals Annette Benning and Julianne Moore playing the lesbian Moms.

Let's have a real study that shows that kids raised with love develop fine regardless of the marital status of their nurturers but that having a mother and father in a loving committed marriage is still the optimum choice and one that all children deserve.

But once again the mainstream media is determining that an unimportant issue is all-important and once again, the stupid Republicans are allowing them to do so.

Alicia Colon resides in New York City and can be reached at aliciav.colon@gmail.com and at www.aliciacolon.com


FOUND IN A CHURCHYARD

We kept our counsel quietly, and thrived
In secret reverie, while platitudes
And mockery from prejudice derived
Surrounded us with violent attitudes.
With faith sincere we never gave up hope,
Pursued our life together with true zeal,
And yet, we wound up swinging from a rope.
Our deaths made pseudo-righteousness seem real.