YOU BE the JUDGE 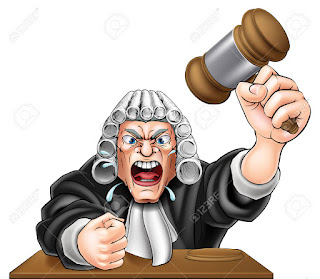 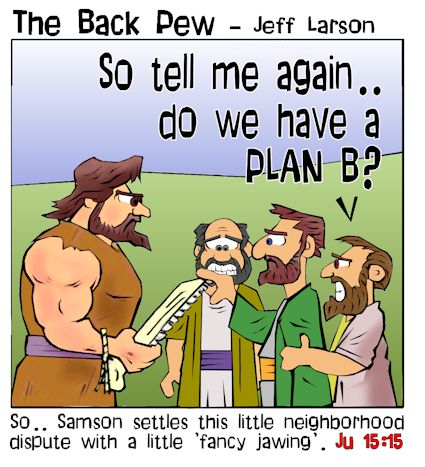 This week, we invite you to speculate
on the recent performance
of two public figures

The Belle of Amherst

Some keep the Sabbath going to Church
I keep it staying at home
With a bobolink for a Chorister
And an orchard for a Dome.

Some keep the Sabbath in Surplice
I just spread my wings
And instead of sounding the Bell for Church
Our little Sexton sings.

God preaches –- a noted clergyman ––
And the sermon is never long.
So instead of getting to Heaven at last
I'm going all along! 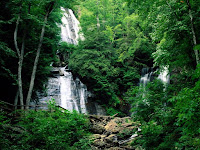 From the Darkness take a rest,
Give yourself a Break;
Accept Encouragement, Respect,
Let go of the Ache.

Feel the Right beyond the Wrong,
You cannot do this on your own;
There’s more than Dark to run from here,
Alone with Him you own a Throne.

Don’t chase yourself in circles —
Wait for Insight at the Dawn ––
And when no strength remains within,
Rest in the everlasting One. 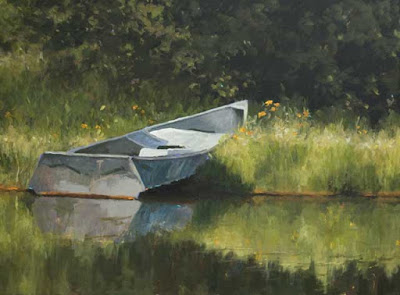 It is with deep sadness and regret we note the passing of our beloved friend, friendly adversary and notably
colorful blogging colleague

who lost his battle with advanced,
metastatic cancer yesterday

JERSEY, TRULY YOU WERE LARGER-THAN-LIFE,
MAY GOD LOVE YOU THROUGHOUT ETERNITY.

WE OFFER NOW OUR KINDEST THOUGHTS, SWEETEST PRAYERS and FONDEST HOPES for HIS WIFE, FAMILY MEMBERS,
and PERSONAL FRIENDS

...  Just when the fun's beginning
Comes the final inning
We can be glad for what we've had ––
And what's to come ...

MORE TRAGIC IRONY in the NEWS

Sen. John McCain, 80, has been diagnosed with a primary glioblastoma, a type of brain tumor, Mayo Clinic doctors directly involved in the senator's care told CNN exclusively. (CNN)
Posted by FreeThinke at 7:00 AM 50 comments:

Just Whom Do These Three
Turkeyturds Think They're Kidding?


The Senate will defer consideration of the GOP healthcare plan that would partially repeal and replace Obamacare until Sen. John McCain, R-Ariz., returns to work following a procedure to remove a blood clot from above his left eye, Senate Majority Leader Mitch McConnell said in a statement late Saturday. After wishing him a "speedy recovery," McConnell, R-Ky., added: "While John is recovering, the Senate will continue our work on legislative items and nominations, and will defer consideration of the Better Care Act." About two hours earlier, McCain´s office revealed that he would be spending a week in his home state … 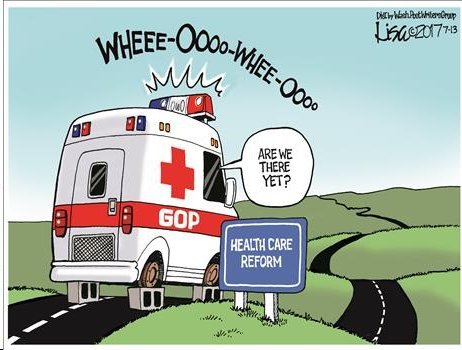 Please CONTINUE sending your prayers,
best thoughts, and fondest hopes
for the recovery of our friend

OUR BEAUTIFUL FIRST LADY
Of Whom We Should
Be Very Proud

She's Moving As Fast
As She Can.
Please Don’t
RUSH HER. 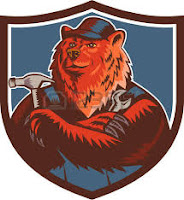 We ask you please to CONTINUE sending your prayers, best thoughts, and fondest hopes for
the recovery of our friend

Mystery Solved: Now We Know Why Comey Did Nothing About Hillary

Russia Scandal: No wonder former FBI Director James Comey refused to press charges last summer against Hillary Clinton for her egregious security breaches: It turns out, he may have been guilty of the same thing.

As the inside-the-beltway political publication The Hill reported, more than half of the memos FBI Director James Comey wrote after having spoken to President Trump about the Russia investigation contained classified information. The Hill cites as its sources "officials familiar with the documents.”

Not surprisingly, perhaps, Trump on Monday morning tweeted out an angry response: "James Comey leaked CLASSIFIED INFORMATION to the media. That is so illegal!”

He may be onto something there.

All told, Comey wrote seven memos based on nine meetings with Trump. In testimony to Congress, he asserted that he had made sure the memos in question didn't have classified material. But a subsequent investigation found markings on four of the memos indicating secret information, the kind that is not allowed to be routinely released to the public.

Comey has long maintained that the memos were his personal property, but virtually no legal authority agrees with that. Nor does the FBI, for that matter. The memos were created on government time and related directly to his work, so they were the property of government.

In short, it sounds like a game of cover-your-hindquarters he's been playing. Because Comey later let outsiders see those memos, and made sure they were leaked to the Trump-hating press, in this case the New York Times, so any protestations of innocence on his part sound more than a little weak.

Let's be very clear here: What Comey did is against FBI rules, and it's a violation of federal secrecy laws, on a par with the violation that Hillary Clinton committed when she decided to run the Secretary of State's office from a private, home-brew email server that was clearly illegal.

The agreement signed by all FBI employees says that "all information acquired by me in connection with my official duties with the FBI and all official material to which I have access remain the property of the United States of America.”

It goes on to add that agents "will not reveal, by any means, any information or material from or related to FBI files or any other information acquired by virtue of my official employment to any unauthorized recipient without prior official written authorization by the FBI."

Hillary signed a similar agreement at the State Department. Yet, she routinely put classified information onto public servers, where it could be grabbed by unscrupulous actors, such as the Chinese and the Russians.

How does that compare to Comey, who asked a lawyer-friend at Columbia University, Prof. Daniel Richman, to leak his memos containing classified information to the news media?

The goal of the handoff was to generate stories so that a special prosecutor would be named to investigate Russian meddling in the U.S. election and, more to the point, Democratic rumors that Trump had colluded with the Russians to beat Hillary.

In short, Comey appears to have delivered classified information to the New York Times and other media for the sole political purpose of bringing down President Trump.

Comey's actions help explain a lot of things that people have puzzled over since last year. During last summer's campaign and the growing scandal over Hillary's cavalier treatment of U.S. secrets on her email server, Comey came to her rescue.

Yes, he said in July, Clinton's actions were "extremely careless." But stung by the criticism he received from the left, he later in the month said that Clinton's violations didn't rise to the level of a prosecutable crime.

Comey's later actions suggest, if anything, he learned from Hillary's chutzpah. You can flout U.S. law, and as long as you have friends and political clout, get away with it — even use your illegality as a bludgeon against your political foes.

Moreover, a June piece by Fox News noted at least 14 stories written by the New York Times going back to Jan. 10 containing "confidential information related to Trump and the FBI, mostly sourced anonymously from senior officials in the FBI and DOJ." Comey, it seems, has been working overtime to sabotage Trump.

This calls into serious question the appointment of Robert Mueller as special counsel to look into the rumors of election meddling by Russia. Comey and Mueller are close friends.

At minimum, Mueller must recuse himself on the Trump matters now before him. His friendship with Comey makes impartiality impossible, and it's a clear conflict.

More importantly, Comey got Hillary off the hook last year from what appeared to be a slam-dunk prosecution. And please remember, no one thought at the time that Trump had any chance at all of beating Hillary.

Now, we find out Comey played a double game with the public and the newly elected president. A case of a deep-state operative, Comey, trying to sabotage Washington-outsider Trump? Or just someone with a fast-and-loose idea about following the law?

Why Trump Was Dead Right To Tell Comey: 'You're Fired'

Are Democrats' Claims About Trump Colluding With Russians Collapsing?

No, Trump's Top-Secret Whispering To Russians Isn't Fake News — But It Is A Fake Issue

More budget cuts …
Green slime and sly lichens smirk in delight
as care is rationed
in a pinching austere clime.

But, a German firm, in 2005,
intercedes, presents a plan, and
generously donates a free pressure-wash,
methodically scrubbing
the four solid upright faces –– of yesterday.

How we yearn, how we flock,
with selfie stick aloft,
to see our better selves.


[NOTE: Kathy (Sanderson) Zwick taught history, literature, and creative writing in international schools in Brussels, Tehran, and London for over 30 years. However, she did not really spend time on her own writing until after she retired. In 2006 she submitted one of her first poems to a competition sponsored by a UK national bookstore and, to her surprise, won. Again, to her surprise, the prize was a collection of poetry books featuring the newly restored edition of Ariel, with a foreword by Frieda Hughes.  Since then, she has had poems published in several UK anthologies including a sonnet anthology, Hand Luggage Only, The Brownsbank Anthology, The Hippocrates Prize, The Ver Prize 2015, and a human rights anthology, In Protest. Many of her poems play with ideas stemming from the quirks and ironies of history.  Kathy also happems to be a high school classmate of FreeThinke.  The two have known each other since 1954.]

Thanks CNN! Worst media
moments of the week

It was a bad week for journalists. Many in the traditional media felt besieged -- especially those who work for a place called CNN -- targeted for scorn by conservatives and for investigation even by their fellow journalists. 1. This Is CNN: This week was extra special for CNN as the network continued its crusade against the president. First, its staffers whined about Trump posting a pro wrestling video modified so Trump appeared to be fighting CNN. His opponent’s head had been humorously replaced with a CNN logo. And then the network targeted the anonymous poster who created the meme … 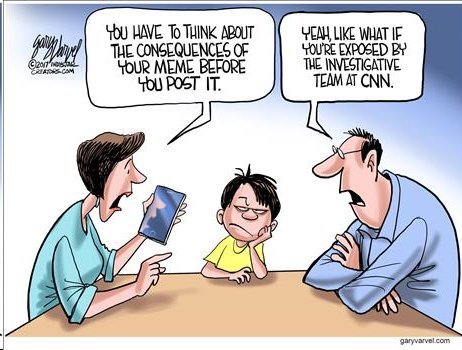 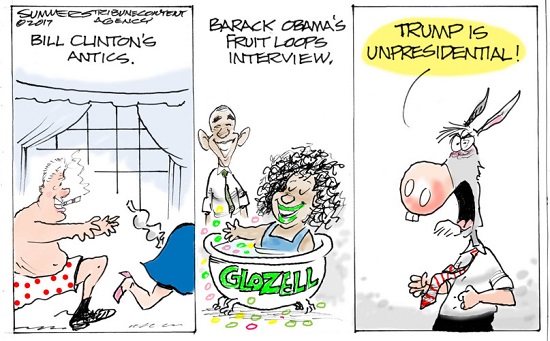 Jersey's condition has improved. His sight has returned, praise God, and he is out of the ICU, but he is still gravely ill and needs your good wishes, best hopes, and prayers
as much or more now than ever.

I know for a fact that our concern for him has encouraged Jersey, and is much appreciated both by him and his wife.
Please keep them in your prayers.
Posted by FreeThinke at 4:00 AM 68 comments: