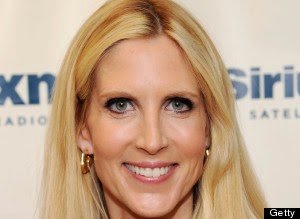 Part III of a New Series

'In his fawning hagiography of Teddy Kennedy, Clymer wrote that Kennedy's liberal voting record made up for his killing that girl at Chappaquiddick. I didn't believe it either, but Adam Clymer actually wrote: Kennedy's "achievements as a senator have towered over his time, changing the lives of far more Americans than remember the name Mary Jo Kopechne." (A review in The Washington Monthly said Clymer's Chappaquiddick section did "not sugarcoat his subject's flaws.")'

'This is the way addled liberals really think. Even as they champion sucking the brains out of little babies, they think of themselves as indelibly compassionate because they favor an overweening, behemoth federal government.'

'That's what the Supreme Court did in Roe vs. Wade, and has repeatedly done in periodic codicils to its original edict. ... In Stenberg vs. Carhart, the court expanded the apocryphal abortion right to an all-new right to stick a fork in the head of a half-born baby.'

'The first lunacy keeps being rewritten to give abortion enthusiasts everything they could possibly want.'