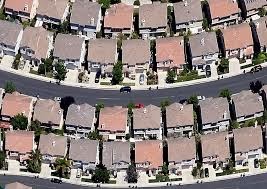 The Architectural Ethos of Today, if we may call it that, is downright SURREALISTIC. The standards we've adopted are neither realistic, nor unrealistic. They are simply PERVERSE.
The McMansion phenomenon is most regrettable –– as was the influence of Frank Lloyd Wrong. The Flat Roof –– a Hallmark of the style now known as "Mid-Century Modern" became popular largely because of FLW's interesting-but-largely-pernicious influence. [Does anyone besides me remember the satirical cartoon in The New Yorker depicting a mythical new housing development where every dwelling was a standardized copy of Fallingwater?;-]

Windowless schools and windowless office buildings using totally artificial systems of "Climate Control" have given us "Sick Building Syndrome," and may be at least partly responsible for the alarming increase in sullen, anti-social, self-absorbed behavior. The tendency to produce increasingly-huge, poorly-constructed, hideously ugly houses with "open floor plans" and no discernible style from materials designed to look "solid" and "important," but are in fact nothing but cheap, hollow, plastic, “engineered” imitations of wood, stone, marble and metal have made the concept of deliberately Planned Obsolescence acceptable on a scale unforeseen when it began sixty-odd years ago in the manufacture of automobiles and appliances. We now find "The Home and Garden Channel" zealously pushing the –– I-think-insane notion –– that anything that looks "out of date," even if still functioning well, absolutely MUST be DESTROYED and REPLACED with something far more expensive, and doubtless designed to fall apart in a few short years –– just in time to greet the next Trend conjured up by the increasingly rapacious Establishment.
Why else do you think I, personally, collect and cherish antiques, have been active for the past 40-odd years in Historic Preservation, and do everything possible to preserve and maintain what-I-regard-as the best aspects of the past?
What could be behind the movement for incessant "change," but the –– I-think-evil –– motive that "consumers" [When, incidentally, did we stop being "people," and become mere "consumers?"] must be encouraged –– even forced –– by ever stricter, more strangulating regulations and artificially-induced feelings of Guilt and Shame by the advertising industry for being "behind the times" to spend more and more on meretricious items with less and less intrinsic value, and new devices and "systems" of increasingly questionable worth.
Face it. The public and domestic architecture produced largely before The Great Depression, but up until the 1950's, had greater structural integrity, was far more pleasing –– or at least interesting –– aesthetically –– and far more pleasant to work in and live with –– than all that has come in it's wake. And those structures were built to LAST.


All of which is to say that in my considered opinion we have sold our proverbial birthright for a mess of proverbial pottage.
Wouldn't it be better for the Environment –– as well as our collective Mental Health –– if we returned to the building of smaller, cozier dwellings made of time-tested durable, easily repaired materials, with classic lines, finer architectural details, and less emphasis on technological innovations in kitchen and bathroom design?

Do watch H-G TV, and prepare to feel DISGUST and CONSTERNATION at the attitudes displayed by the Young Dupes who've been effectively brainwashed into enslaving themselves to the new version of "Keeping Up With The Joneses" fomented, then mandated by the thoroughly corrupt alliance between Big Business and Government.