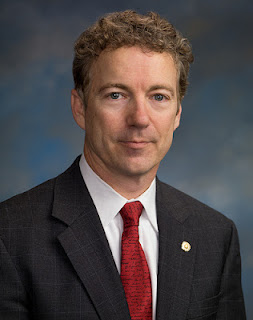 What Was Rand Paul Thinking?

What does this item from Politico say to you about about Rand Paul –– and more importantly about the American political process?
Most of us with conservative sympathies believe Politico to be biased in favor of liberals. Does anything about this particular item bear this out? If so, what might it be?
Do you think Rand Paul has betrayed his father’s libertarian-strict-constructionist ideals, or is he merely being pragmatic?
Washington, DC seems to be a place where “you have to go along to get along.” Do you see any way a newly-elected congressman (or woman) could remain true to himself and his constituents, and survive? Or is the political process, itself, inherently corrupt, and in need of some sort of “revolutionary” overhaul?

ALso, what has been your impression of Rand Paul since he arrived on the stage of our National Political Theater?

[WARNING: Diatribes vilifying and excoriating Ron Paul and his son are apt to be removed. Sober, rational criticism is welcome, of course, but please try not to equate prejudice with passion, even though the two so often go hand in hand.]
~ FreeThinke
POLITICO
June 15, 2012, 5:15 AM
What Was Rand Paul Thinking?
by Charles Mahtesian
[W]hat was a libertarian like Kentucky Sen. Rand Paul thinking when he endorsed Mitt Romney?
It’s a question that many of his supporters –– and his father’s supporters –– have been asking ...
While Rand Paul cited their shared experiences as sons of presidential candidates and their alignment on issues such as auditing the Fed and Internet freedom, a top Paul staffer shed more light Wednesday on the political calculus.
“From a practical matter you have to endorse the candidate before the convention. Romney is going to get the nomination no doubt about that at all, and so it behooves everyone to have Senator Paul endorse him before the convention,” James Milliman, Paul’s state director, told a Louisville Young Republicans meeting in the above video from Kentucky’s Insight Channel 2. “This could enable Senator Paul to have a prime speaking role at the convention and his dad to have a prime speaking role at the convention, so I think all those things factored in.”
The number of “prime speaking roles” the endorsement “could enable” is what’s most interesting: Not just one for Ron Paul, but possibly one for his son as well.
If that’s the case, that’s some great national exposure for a senator in his second year in office –– especially for one who is Senate Minority Leader Mitch McConnell’s junior.
It’s not a bad head start for 2016 either.
http://www.politico.com/blogs/charlie-mahtesian/2012/06/what-was-rand-paul-thinking-126258.html
Posted by FreeThinke at 6:53 AM