A Time for Re-examination and More Probing, Demanding Questions from the Right

President  Obama’s campaign for re-election has had the colossal effrontery to demand a public exhibition of Mitt Romney’s tax returns for the past twelve years, as if it were the very least Governor Romney could do to prove his worthiness to be a candidate for the highest office in the land.
How the Committee to Re-elect the President [Surely it deserves  to be called CREEP today more than it ever did before?;-]  could dare to make such a demand in light of the following boggles the mind, but unmitigated gall and an utter incapacity to feel or exhibit any trace of guilt or shame has always been a hallmark of the left just as excessive, timidity, politeness, reserve and restraint have most regrettably been primary characteristics of the right. 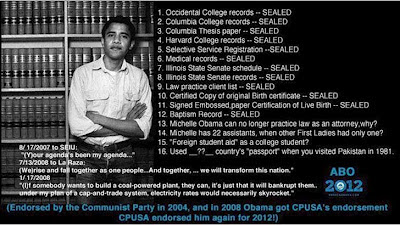 We may already be overly familiar with much of this material, but the questions –– and the objections –– it should raise have never once been seriously addressed by either the enemedia or by any of the myriad spokespersons or apologists for the left.

May I suggest that the very least we could do would be to bombard our congressmen with fiercely outspoken demands that this material be summarily unsealed and freely shared with the electorate.

Surely, if the president had something to be proud of –– and nothing to hide –– this information would have been made available long ago.

What is President Obama hiding?