[Note: This item just arrived unsolicited via email. It seems to be a fine example of “The Tenor of the Times” being shaped by “The Winds of Change.” Is this something we need to address with anxious concern and anger, or something we, perhaps, ought to take in stride, and let pass?]
Last month, JCPenney was the focus of homophobic outrage and organized boycotts after it featured a lesbian couple in its Mother’s Day catalog. So for Father's Day, how did the company respond? With the following: 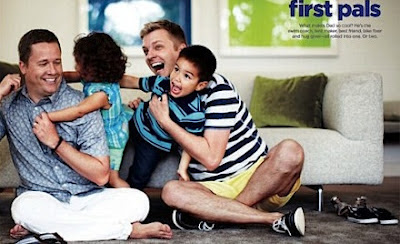 "First pals: What makes Dad so cool? He's the swim coach, tent maker,
best friend, bike fixer and hug giver -- all rolled into one. Or two."
This isn't the first time JCPenney has been attacked by anti-gay groups. When JCPenney hired Ellen DeGeneres earlier this year as a spokesperson, the so-called One Million Moms (OMM) –– a front group for the homophobic American Family Association –– condemned the retailer for hurting family values. But instead of caving in to the pressure, JCPenney went a step farther, and included real-life mothers Wendi and Maggie in its Mother’s Day catalog.
This month, it sent out its Father's Day catalog, with real-life fathers Todd and Cooper playing with their two kids.
Once again, the American Family Association and One Million Moms are pushing back hard and calling for a Father's Day boycott of the retailer for being one of the first major companies to feature same-sex families in national advertising.
JCPenney needs to hear from us now, because it has given in to One Million Moms before. Just last year, JCPenney pulled an ad OMM deemed offensive. If JCPenney were to aquiesce again, it would be a huge blow to the LGBT community.
For too long, advertisers have sought to fit all families into the mold of "one mom, one dad, two kids and a dog". Indeed, our families come in all shapes and sizes, and advertisers are watching what happens with JCPenney closely –– will the public embrace ads with diverse families, or will anti-gay groups win and push "non-traditional" families back out the door? It's up to us to decide.
Join us in celebrating Father's Day by signing our card to thank JCPenney for putting two dads in its ad.
Thank JCPenney for standing up against homophobia and recognizing that families come in all shapes and sizes.

We are being urged to send words of support and encouragement to JC Penney for their brave, bold initiative, but they would probably have to accept contrary opinions as well.
I have not tested the links, but assuming they work, I’d be interested to hear what you have  done or intend to do about this –– if anything.
Also, what do you think of the tone in which this message is written? Do you feel it is, perhaps, calculated to elicit –– sympathy? –– understanding? –– guilt? –– or possibly just controversy calculated to gain attention based on the adage “There is no such thing as bad publicity?”
Do you see this item as cynical? –– manipulative? –– sincere? –– proof of Socialist plot to weaken our moral fiber? –– Good for business? –– bad for business?
Do tell.
~ FreeThinke

Posted by FreeThinke at 8:15 AM