After flashing her nipple in Turkey the other day, Madonna continued to strip down on the latest stop of her body part peep show tour by showing off her 53-year-old, mother-of-four butt in Italy on Tuesday. 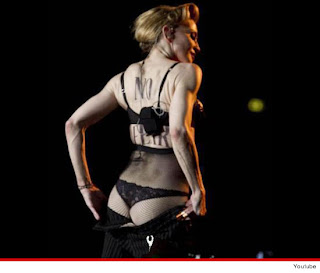 While performing her hit song "Human Nature" again, the Queen of Pop unzipped her pants and exposed her taut, lacy thong-clad 53-year-old backside to the crowd at Rome's Stadio Olimpico.
http://www.tmz.com/2012/06/13/madonna-flashes-butt-rome-concert/
Does anyone find any “socially redeeming value” in this sort of exhibitionism?
Does anyone find it titillating?
Does anyone find it comical?
I suppose women in late middle age might find it inspiring, but I rather hope not. Grandmas running around looking –– and acting –– like hookers on the prowl would make a depressing, not-to-say unnerving, spectacle.
What does this say about the age in which we live? What does it imply?
She can’t sing worth a damn. She can’t dance. She’s not pretty. She’s certainly not beautiful. All she has, as far as I can see, is unmitigated gall.

Colossal effrontery is no substitute for genuine talent.

It bothers the hell out of me that, apparently, this tedious exhibitionism is enough to make a proudly-low-class floozy enduringly popular and many times a millionaire, while many truly beautiful, greatly gifted, well-trained, highly-skilled people are literally starving for work and lack of recognition.
I admit to being shocked, but only because I’m not shocked, if that makes any sense?
Does any of this matter to you?
~ FreeThinke
Posted by FreeThinke at 6:54 PM