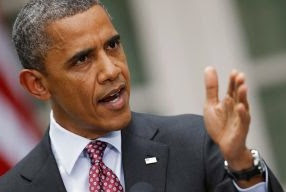 "That's how we built this country –– together. We constructed railroads and highways, the Hoover Dam and the Golden Gate Bridge. We did those things together," he said, in a passage that was presumably meant to be inspirational but was delivered with the faintly petulant air of a great man resentful at having to point out the obvious, yet again. "Together, we touched the surface of the moon, unlocked the mystery of the atom, connected the world through our own science and imagination. We haven't done these things as Democrats or Republicans. We've done them as Americans."

June 15, 2012 Updated: 12:02 p.m.
by Mark Steyn
Round about this time in the election cycle, a presidential challenger finds himself on the stump and posing a simple test to voters: "Ask yourself – are you better off now than you were four years ago?"
But, in fact, you don't need to ask yourself, because the Federal Reserve Board's Survey of Consumer Finances has done it for you. Between 2007 and 2010, Americans' median net worth fell 38.8 percent – or from $126,400 per family to $77,300 per family.
Oh, dear! As I mentioned a few months ago, when readers asked me to recommend countries they could flee to, most of the countries worth fleeing to Americans can no longer afford to live in.
Which means we'll just have to fix things here.
How likely is Barack Obama to do this?
“... Obama can urge us all he wants to band together because when we dream big dreams there's no limit to what Big Government can accomplish. But these days we can't build a new Hoover Dam, only an attractive new corner office for the Assistant Deputy Assistant Deputy Assistant Secretary to the Secretary of Deputy Assistants at the Department of Bureaucratic Sclerosis, and she'll be happy to issue a compliance order that the Hoover Dam's mandatory fish ladders are non-wheelchair accessible, and so the whole joint needs to close. That we can do! If only we dare to dream Big Dreams!! Together!!! ...”
Does anyone really believe a second-term Obama administration is going to build anything? ... [Do you Obama fans] seriously think your guy is going to put up another Hoover Dam?
Let me quote one Deanna Archuleta, Obama's Deputy Assistant Secretary of the Interior, in a speech to Democratic environmentalists in Nevada:
"You will never see another federal dam."
Ever!
You may find Mr. Steyn’s complete article at the following link:

http://www.ocregister.com/opinion/obama-359136-moon-together.html
Is this article fair or unfair to President Obama?
Please say why you think so in either case.
Do you think political satire ought to be labelled as such?
In that way the literal-minded won't be quite so apt to take offense.
Or, do you think readers should be left to figure things out for themselves?
Would we be better off if journalists were required to be fair to all sides?