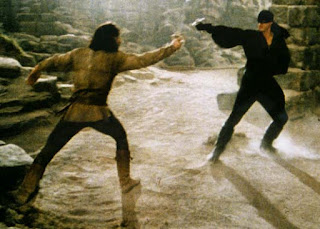 “The artificial codes of conduct and essentially superficial modes of personal expression our various cultures impose on the human spirit are very powerful, because we fear ostracism and isolation from our own kind more than we love freedom.”
After reading a couple of letters from a defender of fascism I've coined a term –– ENEMETICS. A mercifully-short, recently published article by ultra-liberal Chris Hedges, unfortunately not available to us here, is a virtual Rorschach image of the recently conventionalized ravings of the extreme right wing against the left –– so much so it is almost comical in its undisciplined use of hateful hyperbole. Ironically, however, passages from that article hit upon home truths that, I believe, apply to human relations at all levels and from every angle.
ENEMETICS: the rabid, seething and overt expression of a fundamental human craving to loathe and despise SOMETHING in order to give oneself a sense of purpose and identity.  As a species, we appear to be virtually addicted to conflict. 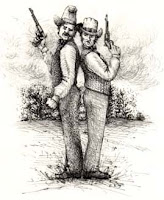 It's the very thing that has held ancient tribal cultures together and empowered them for countless centuries. However, it is hardly peculiar to ancient peoples. Where would anyone be without enemies? Who would they be without enemies to define them? Everyone should ask that of himself -- including thee and me.
Marxism, Fascism, Theocracy –– authoritarianism of any and all kinds –– inevitably lead to TOTALITARIANISM. So, oddly enough, does Anarchism.
"Revolutions" inevitably wind up supplanting one form of tyranny and oppression with another. That's a cliché.

Great sage that I am I figured out for myself a long time ago that the human lust to dominate –– exert power and control over others one personally deems inferior or (more kindly) "in need of guidance" –– is the truest enemy of mankind. Certain hyper-aggressive, hubristic individuals spearhead movements, sway masses, develop poisonous cults, start wars, et al. in order to prove to themselves they count for something. That too is a cliché.
Superstition, poisonous gossip, rabble-rousing, internecine warfare in organizations –– all of it fueled by an illusory pursuit of some kind of  "Truth" or "Justice" –– usually a counterfeit thereof –– are responsible for most of the perplexity, violence, agony, and unnecessary deaths in history.
Aggression, suppression, oppression, exploitation, enslavement –– all bad no matter who may be wielding the Big Stick. As Pogo said back in the early nineteen-fifties:
"We have met the enemy, and he is US."
SO, the moment ANY movement or philosophy becomes aggressive and domineering, it automatically becomes pernicious. Jesus Christ has been ill served by "His" church ever since it became organized, worldly, acquisitive, politically powerful and authoritarian.
While I suppose I am an elitist, and fancy the trappings (at the very least) of wealth, refinement and high culture –– as originally SPONSORED by authoritarian Christianity, Royalty, and Aristocracy and even some pretentious industrialists (i.e. certain so-called Robber Barons of The Gilded Age) –– all of whom left magnificent architectural monuments –– churches and cathedrals, hospitals, university quadrangles, libraries, museums, opera houses, concert halls, railroad stations, city halls, public parks, restored antique villages of historic importance, and many other achievements in their wake –– achievements no savage or peasant society would devise or value –– I cannot sympathize with "fascism," any more than I can tolerate Marxian proletarianism.

I've met too many people up close and personal from supposedly disparate and conflicting walks of life, who act like long lost brothers when free from the constraints and pretenses of ordinary social, professional and business society, not to realize that at root we'd rather love and enjoy one another than anything else.
The artificial codes of conduct and essentially superficial modes of personal expression our various cultures impose on the human spirit are very powerful, because we fear ostracism and isolation from our kind more than we love freedom.
Freedom scares the bleeding tar out of most people, ergo they conform. But deep down, I'm pretty sure most of us would rather fuck than fight –– at least I hope so.
~ FreeThinke
Posted by FreeThinke at 10:16 AM