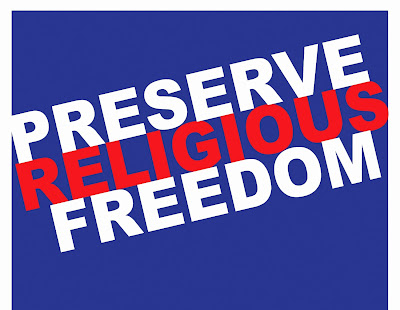 Should Congress be able to force Americans to buy services that go against their religious convictions?
Under the Supreme Court's radical redefinition of the healthcare law, Congress is "taxing" religious groups who refuse to buy products which violate their religious conscience.
The two biggest examples are Christian Scientists and Catholics. As Health and Human Services officials recently clarified, Catholic institutions must pay for insurance that includes coverage of abortion and birth control. Now, if Catholics follow their church beliefs, they will be taxed.
Even more starkly, Christian Scientists are instructed by their textbook to use "radical reliance" on Christian healing for all their needs, including health, adhering to Jesus's command to "heal the sick." Yet, if Christian Scientists refuse to buy insurance, they will be taxed. The church doesn't force abstinence from medicine, but requiring Christian Scientists to buy medical insurance runs counter to the tenets of the their faith.
Taxing or penalizing Christian Scientists who choose not to buy insurance for religious reasons is a clear violation of the First Amendment's free exercise clause.
Thanks to Chief Justice Robert's rewriting of this law, a religious challenge to the healthcare law should be in play. Both Christian Scientists and Catholics were left out of the Court's opinions and would be free to challenge the law. Some Catholics already have, and Christian Scientists should join them.
Fittingly, Justices Kagan and Ginsburg have already offered some support for the case.
During oral arguments for the healthcare law, Justice Kagan made it clear that Christian Scientists could have a reasonable religious case: "[T]hat would be different, you know, if you were up here saying, I represent a class of Christian Scientists. Then you might be able to say, look, you know, why are they bothering me?"
In yesterday's opinions, Justice Ginsburg clarified that First Amendment objections would make any mandate unconstitutional:
A mandate to purchase a particular product would be unconstitutional if, for example, the edict impermissibly abridged the freedom of speech, interfered with the free exercise of religion, or infringed on a liberty interest protected by the Due Process Clause. -- Nat'l Fed. of Ind. Business v. Sebelius, 567 U.S. ___ (2012) (Ginsburg, J., concurring in part and dissenting in part).
This bill interferes with Christian Scientists' free exercise of religion, so according to Justice Ginsburg's analysis the law is unconstitutional. Christian Scientists didn't receive a religious exemption and are being taxed for adhering to their beliefs.
It's important to point out, as Justice Ginsburg implies, that if a bill is unconstitutional for one group, it's unconstitutional for the entire nation. The Supreme Court cannot write in new exemptions into the law. Therefore, if the Court decides this law is an infringement on Christian Scientists' religious freedom, the mandate would be unconstitutional.
This broad impact would be a victory for freedom in America -- and not just religious freedom. America is a diverse nation with many different beliefs and practices, so when Congress tries to act universally, it often does this at the price of someone's liberty. That's one reason why we have a Constitution with limited powers.
Chief Justice Roberts’ decision encourages Congress to use more mandates ("taxes") as a means to their ends. Striking down this mandate would send a message to Congress to stop using coercion as their chosen method and to start using reforms that support freedom.
America's Declaration of Independence and later the Constitution were written to protect religious and individual liberty –– both from the tyranny of a monarchy and the tyranny of the masses.
While the current Supreme Court seems to think that individuals can be coerced for "tax" reasons, even the liberals on the Court believe in religious protections. Christian Scientists, Roman Catholics and liberty-loving Americans need to work together to see this law overturned.

[NOTE: Ron Meyer is a program officer for Young America's Foundation and a graduate of Principia College.]

Posted by FreeThinke at 7:48 AM