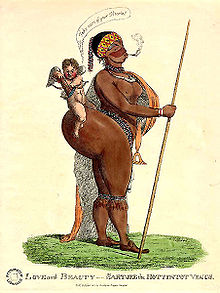 DEFINITION: An unusual  accumulation of fat
in and around the buttocks.

This deposit of fat is not confined to the gluteal regions, but extends to the outside and front of the thighs, forming a thick layer reaching sometimes to the knee.

This curious development constitutes a racial characteristic of the Bushmen It is specially a feature of the women, but it occurs in a less degree in the males. It is also common among the Hottentots, and has been noted among the pygmies of Central Africa. In women it is regarded among them as a beauty: it begins in infancy and is fully developed on the first pregnancy. It is often accompanied by the peculiar formation known as "the Hottentot-apron" hypertrophy*  of the nymphae –– i.e. the labia minora or lesser lips of the vulva; a pair of folds of mucous membrane on the inner side of the labia majora, united over the clitoris.

No satisfactory explanation of these malformations has been offered. Steatopygia would seem to have been a characteristic of a race which once extended from the Gulf of Aden  to the Cape of Good Hope, of which stock Bushmen and pygmies are remnants. The discovery in the caves of the south of France of figures in ivory presenting a remarkable development of the thighs, and even the peculiar prolongation of the nymphae, has been used to support the theory that a steatopygous race once existed in Europe.

What seems certain is that steatopygia in both sexes was fairly widespread among the early races of man. While the Bushmen and Hottentots afford the most noticeable examples of its development, it is by no means rare in other parts of Africa, and occurs even more frequently among Bastaards of the male sex than among Hottentot women.

Posted by FreeThinke at 5:07 AM