My Hopes for Last Night

Romney needs to grow a pair,
And clear the air by breathing fire.

If he stays polite and kind,
We'll find he's not our heart's desire.

If tonight is one big snore,
A crashing bore too diplomatic,

That Barry's reelection will be neatly automatic.

Please let us know how you think it went.
We're always eager to know what you think and how you feel.

Apparently, "the pundits" thought Governor's Romney's performance was far superior to President Obama's last night. Obama has been judged "uncomfortable," "lackluster," "grumpy," "off his game,"  and "unimpressive" by several commentators from the left. Frankly, I didn't see that. The president seemed his usual cool, unflappable, smoothly prevaricating, often charmingly boyish –– even gracious –– old self –– a much more attractive image than the fervid "coon shoutin' southern preacher" instilling fear and loathing into the hearts of his listeners we've seen on the stump these past few weeks.

Governor Romney was poised, always polite, on top of his material, but nowhere near as incisive, challenging and condemnatory as I believe he could have been and should have been. I give him full marks for repeatedly denying the president's repeated accusation that the governor plans to initiate a five-billion dollar tax cut "for the rich." The sweet, benign, faintly amused look on the governor's face throughout the evening was frankly attractive and reassuring, but then so was the president's well-known infectious grin and confident body language when the two exchanged greetings initially, and at the end of the performance.

I found it interesting –– and frankly encouraging –– that Governor Romney's repeated assertion that President Obama intends to take SEVEN-HUNDRED-SIXTEEN BILLION DOLLARS out of MEDICARE was not denied by the president.

Over all, except for the irksome aura of self-importance projected by querulous, old Jim Lehrer, whose obvious bias in favor of the president manifested itself in the way he kept trying to interrupt and balk Governor Romney's responses while allowing the president to emit verbal diarrhea in copious abundance, it was a rather too even-tempered, lackluster affair for my taste. Nether candidate made any "gaffes," but neither did either one make such a strong case for himself that his victory should be assured on the strength of last night's performance.

Well, maybe not so disappointing after all: 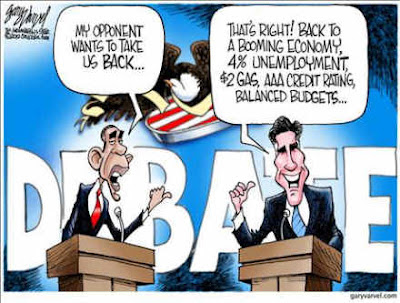 Posted by FreeThinke at 8:37 PM