Joe Biden, DC's Dumbest, Deadliest Clown,
Pulls His Asshole Out of His Pants
Aims It at the NRA, the Second Amendment
And Your Right to Defend Yourself 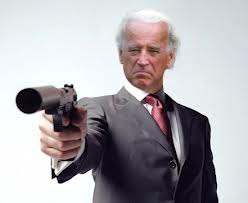 CONGRESSMAN FLOODED WITH CALLS ON GUN CONTROL:
9-TO-1 AGAINST...

Headlines from The DRUDGE Report

From Jack Camwell’s listing at Christian Fearing God-Man of The Five Worst Things that Happened in 2012:

1.  Sandyhook Elementary:  For me, this is easily the worst thing that happened this year.  An entire first-grade class was mercilessly slaughtered by psychopath Adam Lanza, who of course took his own life before he could be apprehended.  This event really crippled the soul of America.  Not only did it make a lot of parents feel uneasy about how safe their small children can be in such a horrifying world, but it re-ignited the gun control debate with a fiery ferocity.  This shooting is making the nation as crazy as Lanza.  To suggest that a complete psychopath is indicative of a larger societal problem is pretty ridiculous.  "Society is sick," so many people said.  No: the 1% of American population suffering from violent mental illness is sick.  I'm not sick.  Chances are that my readers are not sick.  But, in typical American fashion, since justice cannot be done upon Adam Lanza, we have to find an effigy to burn, a scapegoat to slaughter.  Gun ownership will take the fall for the crazies, the morons, and the criminals that make up a sliver of American society.

3.  The Aurora, CO Shooting:  Aside from the fact that it made me a little nervous to take my son with me to see The Dark Knight Rises on opening night, this was a complete nightmare for all involved, and for American society as a whole.  James Holmes killed 12ish people I think, one of whom was a child around 8 years old.  Of course, this raised the perennial question of "how could this have been prevented," and anyone with a brain answered "it can't."  James Holmes was a neuroscience PhD student with no history of mental illness, aggression, or violence.  For whatever reason, he snapped.  And of course, society snapped along with him.  Because of this, a movie-theater shoot-out scene was removed from the movie Gangbusters, because apparently it's too insensitve.  I'll leave you to ponder just how deeply idiotic and hypocritical that sounds coming from Hollywood, sounds coming from Hollywood.