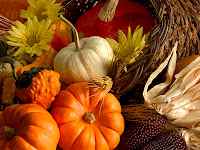 Of all events parading through the year
Not one can to this humble feast compare.
To feel or offer thanks today is rare
However well our lives remain in gear.

As ease became the norm, we soon forgot
None of Plymouth’s Pilgrims felt regret.
Knowing death and cruel privation’s threat
Spoiled not their faith, or made them curse their lot.

Given much yet now we seem to crave
Immeasurable bounty we don’t need
Voluptuous excess revealing Greed
Indifference to the noble, fine and brave.

No pilgrim, pioneer or great tycoon*
Grew up as a self-indulgent goon.

1. A wealthy and powerful businessperson or industrialist; a magnate.
2. Used formerly as a title for a Japanese shogun.

Japanese taikun, title of a shogun, of Chinese origin

Claims have been made in today's global economy that some business leaders have more power than heads of states. It is etymologically fitting that such leaders are sometimes called tycoons. Tycoon came into English from Japanese, which had borrowed the title, meaning "great prince," from Chinese. Use of the word was intended to make the shogun, the commander in chief of the Japanese army, more impressive to foreigners (his official title shogun merely meant "general"). It worked with Matthew C. Perry, who opened Japan to the West in 1854; Perry carried out his negotiations with the shogun, thinking him to be the emperor. In fact, the shogun did rule Japan, although he was supposedly acting for the emperor. The shogun's title, taikun, was brought back to the United States after Perry's visit. Abraham Lincoln's cabinet members used tycoon as an affectionate nickname for the President. The word soon came to be used for business and industry leaders at times being applied to figures like J. P. Morgan, who may indeed have wielded more power than many princes and presidents.