When America Still Knew How to Have Fun
Betty Hutton’s talent was so unique great songwriters of the 1940’s wrote novelty songs especially for her. She was as all-American as they made ‘em –– brash, raucous, charming, endearing, sexy –– and funny as hell. Her personal life skidded perilously close to tragedy, but as a performer she never gave less than a hundred percent, God love her!

We never saw her likes before, and it’s unlikely we’ll ever see or hear anything like it again.
There’s a reason we’ve never heard the songs Betty Hutton sang again after her career in Hollywood ended, and her life began to spin out of control.
The reason?
No one but she had the unique combination of qualities needed to put those songs across. 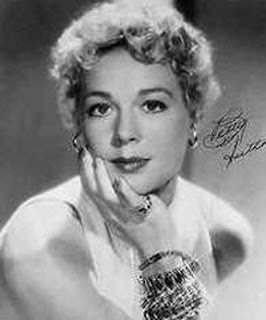 His Rocking Horse Ran Away is probably the best of the special songs written for Betty –– it’s certainly a personal favorite with me.  It never fails to make me burst out laughing –– and then I cry a little –– because it’s a potent reminder of the capacity for innocent merriment we, as a people, have lost.
HIS ROCKING HORSE RAN AWAY

I must sit down for a minute, I'm ready to fall in a heap
Willie's been fed and I've tucked him in bed,
thank goodness the darling's asleep
He's a wonderful boy and a joy and a boon

SPOKEN: Ah, gee, you should have seen him this afternoon

Slam went the screen door, smash went the mirror,
looks like I'll soon be gray
But he smiles and what's the difference and maybe some Mother's Day
I'll remember when his rocking horse ran away

Got up early this morning, wore a flimsy negligee
Had to hurry to fix the breakfast and get daddy on his way
Figured I could get the paper, so the neighbors wouldn't see
So I sneaked out on the porch, very, very quietly
Wham went the dish pan, then came a holler,
up went the neighbor's shade
It was Mother's Little Darling, out on a commando raid

Came home late from a picture. I was tired, my shoes were tight
Took off my stockings, dropped my girdle
Got undressed and pulled the light. Boy!
Slipped into my night gown, then tiptoed across the floor
Better have a look at Junior, so I peeked into his door
Clang, clang, clang went a cowbell,
whee went a whistle, I nearly had a stroke
It was mother's precious baby, just havin' his little joke

Always just when I'm breathin' a peaceful sigh
There's G-Men, coppers and robbers and hi-yo silver!
Bam went the book case, boot went the fruit bowl,
boom went the glass bouquet
But he smiles and what's the difference and maybe some Mother's Day
I'll remember when,

On that eventful day, when his rocking horse ran away!
~ § ~
HIS ROCKING HORSE RAN AWAY
From the Film: And The Angels Sing 1944
(Lyrics : Johnny Burke / Music : Jimmy Van Heusen)
~ FreeThinke
Posted by FreeThinke at 7:18 AM