Why Chief Justice Roberts Made the Right Decision 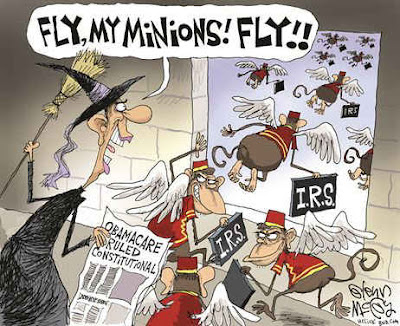 Bane or Boon? You be the Judge
Before you condemn or childishly wish harm to Chief Justice Roberts it’s important to think carefully about the meaning –– the true nature –– of his ruling on Obamacare. The Left is already ululating exuberant cries of victory, of course, and making frenzied gestures of joy that their pet imposition was upheld and all the rest.
Relax. Let them have their fun.Their victory celebration is almost certain to be short-lived.
Here’s what really occurred — payback. Yes, payback for Obama’s numerous, ill-advised and childish insults directed toward the high court.
The Chief Justice rendered the mandate’s justification under the commerce clause unconstitutional. A twisted interpretation of the commerce clause is how the Democrats got the abomination  they call The Affordable Healthcare Act going in the first place. This is critical.
His ruling means Congress can’t compel American citizens to purchase anything –– ever. The notion has now officially and forever been declared  unconstitutional.
Next, he stated that, because Congress doesn’t have the ability to mandate, it must rely on its power to tax in order to fund the program. This means, of course, that the mechanism funding Obamacare is a tax.
This is also critical. Remember please that during the initial battles to establish the program, the Democrats called it a penalty, while Republicans insisted it was a tax.
Democrats consistently sold it as a penalty. It went to vote as a penalty. Obama declared endlessly that it was not a tax. He billed it as a penalty.
However, when attorneys for the Democrats argued in front of the Supreme Court, they said in effect, “Hey, a penalty or a tax? Who cares? Either way is fine with us,” so the Chief Justice gav them a tax. It is now the official law of the land — beyond obfuscatory rhetoric and other semantical shenanigans. The Affordable Healthcare Act must be funded officially by tax dollars.
Democrats now must defend a tax increase to justify the healthcare law.
Finally, Chief Justice Roberts declared unconstitutional the Affordable Care Act’s assertion that the federal government has the power to bully states into submission by withdrawing their existing medicaid funding.
Liberals had effectively said through the healthcare act as originally drafted that the states must comply or we will stop existing funding. John Roberts has made that impossible. As things stand now, because of his decision, If a state takes federal money, the central government can tell the state how to run a program, but if the state refuses money, the federal government can’t penalize the state by withdrawing other, unrelated funding.

That should mean a state can decline to participate in Obamacare without penalty.
Obviously, this creates a serious problem for the healthcare act. Are we going to have 10, 12, 25 states not participating in a national healthcare program?
Suddenly, it’s no longer “national,” is it?
Ultimately, Roberts supported states rights by limiting the federal government’s coercive capacities.
He ruled that the government can not force the people to purchase products or services under the commerce clause and he forced liberals to have to come clean and admit that Obama-care is funded by tax increases.
Although he didn’t guarantee a victory for Romney, he certainly did more than his part to help the Republican candidate, and should be applauded for his it.
A good case has just be made for considering John Roberts a brilliant de facto –– though probably inadvertent –– political strategist.
It has, hasn’t it?
~ FreeThinke

Posted by FreeThinke at 8:45 AM