Who is more to blame?
HILLARY for dissembling, or
The FBI for failing to charge in and seize
the damnable device the moment it's existence became known before damning evidence could be removed? 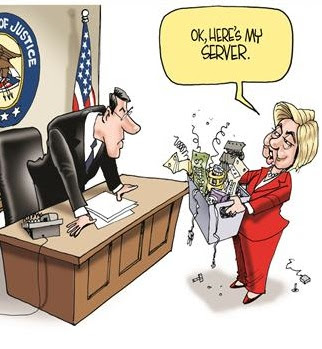 Obviously, Hillary doesn't understand the concept of "due diligence"
when seeking out a secret email account.

There a terrific techie thread running here.Check it out.

Servergate is probably the most interesting political story of our time.
Forgive us while we over-cover.

Woodstock Anniversary Wind Up:
When Max Yasgur went out to clean up his cornfield
he found Bernie Sanders. Bernie's brain is still there.

Hillary, this is what a "vast right wing conspiracy" looks like. Choosing life over loss of government revenue.

Obama´s Betrayals: The President´s Secret Offer To Iran
Before Negotiations

The ugly truth is coming out and now it's up to Congress to stop
0bama's faux nuclear deal with Iran.