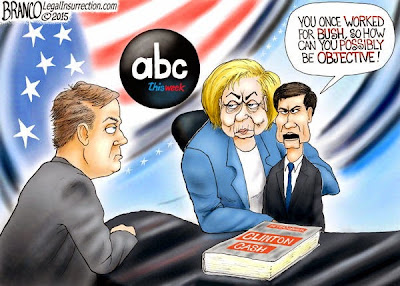 Annotated Headlines Linked
at Lucianne. com
As Ramadi Falls to ISIS, POTUS Goes Golfing,
Gets New Twitter Account
Obama opens a twitter account in time for ISIS to thank him
for all the new American weapons they have captured.

Hillary Caught in Another Email Lie: New Docs Reveal She Used Second Private Account While Sec. of State
If you have an email from Hillary while she was SOS, hold on to it.
It may be valuable on eBay someday.

Staff quit Clinton Foundation over Chelsea
Chelsea learns valuable lesson in Management 101. If Foundation
has your name, you make the rules.
The Truth About Benghazi Slowly Emerges
Ever get mad on Tuesdays? You will now. It seems most
of the relevant evidence of corruption has been destroyed.

United State of Denial: White House Pulls Together
Post-Ramadi Spin
Realizing that failure is not an option,
Obama looksfor someone else to blame.

George Stephanopoulos’ future —
and $105M contract — in danger
$75,000 is a pretty mingy kick-back for a 105M contract
Wonder what the others coughed up.

Clinton Friend’s Libya Role Blurs
Lines of Politics and Business
Membership in the Clinton inner circle has its rewards.
Sooner or later, it could be prison orange.

What Sidney Blumenthal’s Memos to Hillary
Clinton Said, and How They Were Handled
Now we'll be wanting to know how the money was handled.

Posted by FreeThinke at 4:00 PM