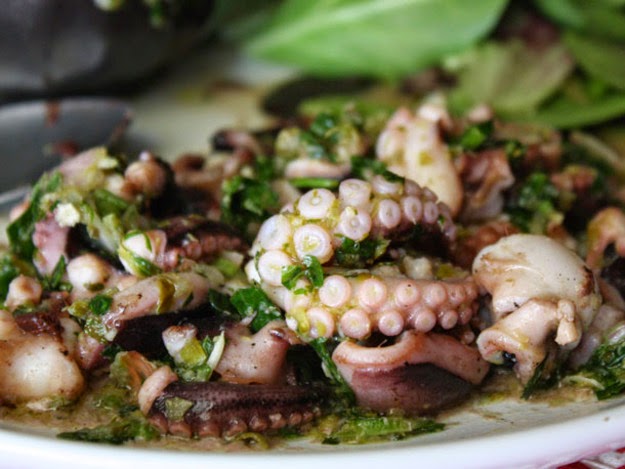 If you’ve never tasted Octopus, you’ll find it’s a lot like calamari, just stronger, and meatier.  Mexican Octopus Salad (“ensalada de pulpo”) made with fresh tomatoes, cucumbers, cilantro, and chiles makes a wonderful side dish, main dish for a luncheon, or can be exquisite as a topping for tacos or tostadas. Octopus isn’t always available at local markets but sometimes it appears at a local Whole Foods  Store, and then it’s time size the opportunity make mincemeat of the slithery looking sea beast. Octopus Slad may be made like a ceviche made where the octopus is cooked without heat in an acidic marinade. but for his recipe the octopus will be blanched first by plunging it into boiling water, then slowly stewing it in its own juices with fragrant herbs. Ths process concentrates the natural flavor of the octopus  as it absorbs flavor from the herbs. Slow cooking helps tenderize the normally rubbery texture of the octopus so that it’s texture resembles that of a steamed lobster. After cooking we cool, then chop the meat, toss it with the tomatoes and other vegetables set aside in a dressing made of lime juice, cider vinegar, olive oil, and then chill it for several hours.

1. Heat a large pot of lightly salted water to a boil.

Place the raw octopus in the boiling water, return the water to a boil, and boil for 2 minutes.

Remove the Octopus from the pot and place to cool on a sheet pan.

Cut Octopus into large pieces, discard  the guts, beak, ink sac,may have  been neglected in the cleaning process. Place the pieces of Octopus on the herbs.

3. Place a bed of the parsley, cilantro, fresh oregano in a small Dutch oven or covered casserole. Put Octopus over the herbs, cover and bake at 250° for 1 3/4 hours, until tender.

4. Remove the pieces of octopus to a sheet pan to cool. When cool to touch, pull off any gelatinous bits that surround the pieces of the octopus you  may not want to eat. They taste good, but you may not like the slimy texture. If rubbery slime doesn’t bother you, just leave it. The small round pieces of meat that resemble eyeballs are not eyeballs, but loose suction cups from the creature’s tentacles. They also taste good so don’t be squeamish. Cut the meat of the Octopus into 1/2-inch pieces.

5. Place the chopped octopus into a large, mixing bowl.  Add the cucumbers, red onion, scallions, cilantro, dried oregano, and jalapeño,  the lime juice, cider vinegar, olive oil, a sprinkle of salt, and stir to combine.  Cover and chill for at least 2 hours, but better overnight.  Just before serving  stir in the chilled chopped tomatoes.