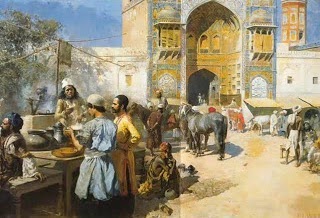 In a Persian Market

Ketèlbey was born in Alma Street in the Lozells area of Birmingham, England, the son of an engraver, George Henry Ketelbey, and Sarah Ann Aston.

At the age of eleven he wrote a piano sonata that won praise from Edward Elgar. Ketèlbey gained a scholarship to the Trinity College of Music in London, where he showed his talent for playing various orchestral instruments reflected in the masterfully colourful orchestrations, especially of oriental inspiration, that became his trademark.

While at Trinity he beat Gustav Holst in competition for a musical scholarship ...

Ketèlbey held a number of positions, including organist at St John's, Wimbledon, before being appointed musical director of London's Vaudeville Theatre ... While at the Vaudeville he continued writing diverse vocal and instrumental music.

Later, he became famous for composing popular light-classical music, much of which was used to accompany silent films, and as mood music at tea dances. Success enabled him to relinquish his London appointments ... Although not proven, he is frequently quoted as becoming Britain's first millionaire composer.

In 1929 he was proclaimed "Britain's Greatest Living Composer" in the Performing Right Gazette as , on the basis of the sheer number of performances of his works.