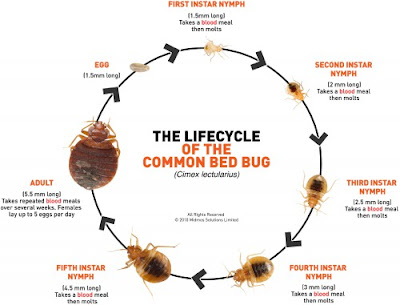 CHARLOTTE, N.C. — You think incumbent politicians are hard to get rid of? Try bedbugs.
The blood-sucking insects have made a resurgence in recent years, including reports of them at nine of the hotels being used for Democrats’ nominating convention this week in Charlotte.
Some convention-goers were fearful in the run-up to the convention, and state officials and exterminators said bedbug reports have been on the uptick in and around the Queen City.
But county health officials say they have taken precautions to make sure the pests aren’t waiting in hotel rooms to go home with guests as unwanted souvenirs.
“We did inspect all of the hotels and we do respond to complaints,” said Stephen Graham, an environmental supervisor for the Mecklenburg County Health Department. “We’re required to inspect them once a year, and we inspected them all after the start of the new fiscal year [July 1].”
The rise in the pest’s activity has led to the advent of websites such as BedBugReports.com and BedBugRegistry.com, where hotel-goers can report their bad experiences in hopes of warning other travelers.
A search of BedBugRegistry.com brings up more than 30 Charlotte-area hotels where visitors have reported bedbugs, including nine hotels that will host at least 10 of the state delegations attending this week’s convention.
Some of the hotels — such as the DoubleTree by Hilton Charlotte Airport hotel, which will host the Connecticut delegation — have had a single report more than a year ago. But the Drury Inn & Suites Northlake, which will house Ohio delegates, had a report from an anonymous Internet user claiming there were “numerous bugs” during a stay in April after several pest-free visits.
The Charlotte-Center City Holiday Inn, which will welcome the Illinois delegation, has been reported three times since March by Web users whose complaints included finding bugs “in clear sight” and ending up “covered in bites” after a one-night stay.
Of the hotels expected to host convention delegates, the most complaints were aimed at the Charlotte Marriott City Center, where five reports have been posted since July 2011.
Visitors reported finding bites days after their stays, and at least two said they ended up bringing bugs home.
Another said the hotel refused to provide reimbursement for a laundry bill after the visitor had to dry-clean clothes.
A person claiming to be hotel management posted a reply on the site.
“The Charlotte Marriott City Center maintains strict cleanliness standards, which includes constant monitoring and routine assessments of guestrooms and public space,” the person wrote, adding that the hotel only refunds costs if a third-party inspector finds bedbugs. “We pride ourselves on providing quality conscientious attention to the property and guests.”
Hotels contacted by The Washington Times about bedbug reports either referred calls to their corporate headquarters or didn’t return messages.
Charlotte has a long way to go before its bedbug levels approach cities such as New York, Cincinnati and Washington, D.C., where recent infestations have made national news, but a study this year by pest control company Orkin shows activity there has been on the rise.
The survey, released in March, rated Charlotte as having the 33rd-most bedbug reports of any city in 2011. The list was topped by Cincinnati, Chicago and Detroit.
By contrast, the GOP’s choice for its convention last week, Tampa, Fla., didn’t make the list of the 50 most-infested cities.
Jung W. Kim, environmental senior specialist for the North Carolina Department of Agriculture and Consumer Services, said that bedbugs are on the rise, but about half of cases go unreported because victims don’t react to bites.
Mr. Kim said upon checking into a hotel, guests should inspect their mattress, box spring and the back of their headboard for bedbug fecal matter in the form of tiny black dots.
He said guests should request a new room if they suspect bedbugs, and could take other steps such as keeping their luggage in the bathroom or putting washable items in the dryer immediately after returning home.
“You may get bites, but you’re not going to bring any bedbugs to your home,” he said. “As long as you don’t bring bedbugs to your home, you should be fine.”