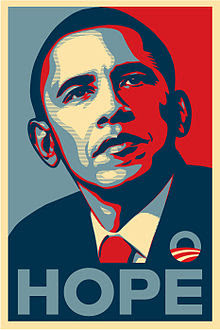 Prosecutors want Shephard Fairey sentencing to serve as a warning

Federal prosecutors want Shepard Fairey, the artist who created the Barack Obama “Hope” poster, to serve time in prison following his misdemeanor conviction for destroying and fabricating documents in connection with a civil lawsuit over the iconic campaign image.

In advance of Friday’s scheduled sentencing of Fairey in U.S. District Court in Manhattan, the Department of Justice has filed a memorandum arguing that a prison term for the 42-year-old artist would be “appropriate.”

However, prosecutors did not specify how long Fairey should be incarcerated (though, statutorily, his punishment would not exceed six months). Additionally, government lawyers have contended that Judge Frank Maas could fine Fairey up to $3.2 million.

“A sentence without any term of imprisonment sends a terrible message to those who might commit the same sort of criminal conduct,” wrote prosecutor Daniel Levy in a September 2 memo. “Encouraging parties to game the civil litigation system…creates terrible incentives and subverts the truth-finding function of civil litigation.”

Fairey, seen in the above mug shot, has admitted destroying electronic records and creating fake documents in an effort to thwart a copyright lawsuit brought by the Associated Press, which contended that Fairey had based the “Hope” image on a photo taken by an AP lensman.

Levy stated that Fairey reaped significant reputational and financial benefits from the Obama “Hope” image, which was created in early-2008. The prosecutor specifically cited the escalating combined profits of three Fairey companies, which grossed $2.93 million in 2007, $4.59 million in 2008, and $6.08 million in 2009.

In a sentencing memo filed by Fairey’s lawyers, the artist is described as a devoted husband and father of two young girls who deeply regrets “the worst mistake of his life.” In dozens of letters to Maas, Fairey’s friends, coworkers, and business associates convincingly attest to his contrition, charitable giving, and community service.

Arguing that a prison term is not warranted, Fairey’s counsel claimed that, following his guilty plea earlier this year, he has endured an online “public shaming” that “will now be a permanent scarlet letter for Shepard to wear.” Fairey’s lawyers have also contended that the artist, a diabetic, might not receive proper treatment for his illness if incarcerated in a Bureau of Prisons facility.

In a letter to Maas seeking leniency for Fairey, former Obama for America official Scott Greenstein recalled asking the artist to create a work during the 2008 Democratic primary campaign. Fairey agreed, Greenstein wrote, because he “was willing to stand up and announce his support for Obama” at a time when others did not want to choose sides.

Fairey was finishing up the “Hope” poster “while he was waiting for his wife to deliver their second child,” noted Greenstein. Amanda Fairey, the artist’s spouse, wrote Maas that she “feared that making the poster would not be good for Shepard’s career.” But, she added, her husband “looked me in the eye and said to me that the reason he would be doing this was for our daughter’s future, not his career."
Posted by FreeThinke at 5:00 AM