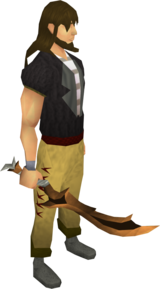 Oh how I love the garbage to delete!
The process fills my pulsing soul with thrills
With which naught ever could hope to compete.
'Tis quite like taking aim from window sills ––

High above the vulgar madding crowd ––
At mischief-makers' furtive machinations
Engaging in atrocious acts unbowed
By decency or prudent calculations.

What fun to act the role of unknown sniper
Picking off the brigands self-directed!
Better that than letting vicious vipers
Nurse on blameless bosoms undetected.

Exulting as I wield my scimitar
I lop the heads off trolls who’ve gone too far.