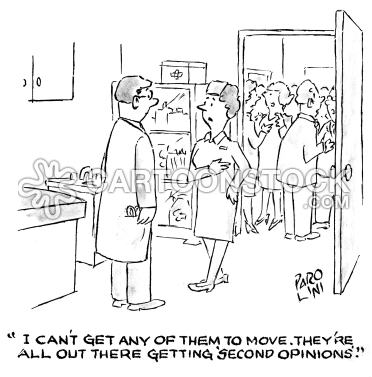 The problem of escalating medical costs started very soon after we initiated MEDICARE –– a form of socialized medicine which seems on the surface to have helped a great many people through the inevitable depredations of old age. Unfortunately, this "help" came at far too great a price.

As you all know by now, I am pretty old, and I remember very well the time when it truly was possible for individuals to pay their own way. It might not have been easy, but it was possible.

I'll skip the standard lecture on inflation, if you don't understand it's terrible power by now, you never will. The problem has been that the cost of medical care has risen at rates that far exceed the rate of inflation since the early SICK-sties.

Because of Government Interventionism, which always PRETENDS to be based on a genuine concern for our well-being, but in truth is nothing but a scheme to rob us of our liberty and autonomy in order take totalitarian CONTROL of our lives. It's about POWER and CONTROL –– NOT "help."

At any rate, Industry –– in this case pharmaceuticals and doctor-hospital-laboratory-rehabilitation-nursing home conglomerate –– in order to save itself from the ravages of Uncle Satan has entered into an unholy partnership with Uncle Satan the result of which has been a de facto conspiracy against the public's best interests.

Disbelieve that, and you're fuggin idiot.

The taxpayers, who government believes have obscene amounts of limitless wealth they don't know how to spend properly, may be effectively robbed at gunpoint by this Government-Industry CARTEL. We citizens have been hoodwinked and manipulated into a position where we have no no real defense against this demonic alliance.

Take all of that combined with the predatory nature of opportunistic lawyers who have become monstrous SHAKEDOWN ARTISTS in the past forty years, and have mastered ways of milking and bilking The System that make the machinations of Mafia Dons seem trivial and rather sweet-natured in comparison, and you have the stinking mess we are living with right now.

I'll soon be 73. When I was thirty, my Blue-Cross-Blue-Shield executive coverage –– the very best medical insurance available at the time –– cost me thirteen dollars a QUARTER. My employer paid an equal amount on my behalf as part of our "benefit package.”  That was fifty-two bucks every three months -- a mere $208.00 per annum.

There's no point in my continuing. Suffice it to say that by the time –– a mere thirty-five years later –– I reached sixty-five I was paying nearly EIGHT-HUNDRED DOLLARS a MONTH for a policy vastly inferior to my old Blue Cross executive coverage with a FIVE-THOUSAND DOLLAR DEDUCTIBLE.

PART of the reason this has happened also lies at the feet of nursing and hospital workers UNIONS who have forced salaries to reach tremendous heights never dreamed of in the old days, and that vast increase, of course has been passed on to the PATIENTS.

I see ALL this trouble as stemming from the very stupid desire on the part of too many members of the public to believe that a "FREE LUNCH" to which they are "ENTITLED" is available, if only enough pressure is brought to bear on the powers that be. That's what SOCIALISM is –– a naive, greedy, and innately vicious assumption that someone ELSE should be forced to pay "MY" expenses.
As has so often been said, "The only thing wrong with Socialism is that sooner or later you run out of OTHER PEOPLE'S MONEY.” "When will they ever learn?"

ONLY after "they" have BANKRUPTED the nation.

Meanwhile The Oligarchs, who have craftily ENGINEERED all this, continue to ride high above us and retain the privilege of crapping all over us at will.