Because good news and pleasant events are so rarely reported in Bloggerville these days, I have to tell you what happened to me just two days ago. 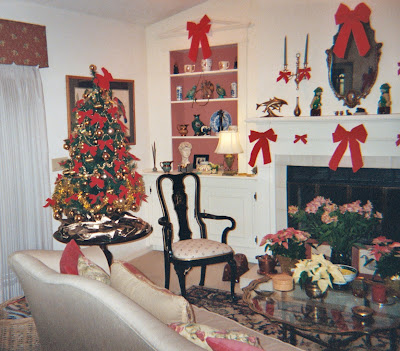 I have a dear friend I’ve never met in person. We know each other only through correspondence and occasional telephone conversations. This in itself would not be so unusual in an age where it’s so easy meet and greet anonymously via the internet, but two days ago something extraordinary came to me because of this relationship.

A few days ago my friend and I were talking, and I happened to mention that artificial Christmas decorations, while practical, cheap and not bad looking, had made the annual celebration feel sterile and uninspiring. I missed the scent of pine and the wonder of decking the door and the mantelpiece with real greenery clipped from branches in my own backyard.

A couple of days later I my friend called, and asked me if I had seen what was on my front porch yet?

I don’t really have a front porch –– the entrance here is more outdoor vestibule than porch –– but I had to admit my curiosity was piqued.

“You sent me something, didn’t you?” I asked. “Well, I hope it isn’t food, you know I’m doing my best to lose weight.”

“All right, I’ll take the phone to the front door, but I’ll have to put you on speaker for a while. I hope that’s okay?”

When I opened the door, a huge box lay just in front of the mat. I couldn’t imagine what it contained.

“Shouldn’t be,” I heard through the speaker.

“Do I have to open it right now?” I asked. “It looks as though I’m going to have to use a knife to cut through all the tape. It may take some time.”

The suspense was beginning to get to me, so I dragged the box inside, set it on the piano bench, which it pretty well covered, and rushed into the kitchen to get the knife.

The very second I broke the seal and started to cut through the packing tape a lovely aroma escaped from the box, and brought me straight back to the good old days when Christmas really felt like Christmas. It was the nostalgic scent of freshly-cut pine, balsam  and hemlock.

I lifted the burden out of the box, and beheld a beautiful long-oval centerpiece made from various types of fir studded with sprigs of variegated holly adorned with pine cones, clusters of red holly berries and a bright red bow. Three tall red tapers came with the package, and sure enough a built in candle holder was soon discovered  buried among the branches at the foundation of the pretty piece.

Naturally I thanked my friend profusely. I was genuinely touched, but at the same time felt I now had my work cut out for me.

I hadn’t said much about it to anyone, but I had pretty well decided not to bother with Christmas decorations this year. After all, I live by myself, have few visitors, and ... well, you know –– or maybe you don’t?

The upshot of it all was that yesterday I felt inspired and put up the tree, dug out the Dellarobbia-style wreath with the plastic fruit, dusted it off, and spruced it up with some small red bows, and hung it on the door. It looked pretty good, but it just wasn’t enough, so soon I felt compelled to adorn the wrought-iron branch sculpture over the wrought iron loveseat with the string of a hundred tiny, multi-colored lights bought for the purpose years ago. Then a big red velvet bow on the mirror over the half-moon console table opposite. That was much better.

It was beginning to look a lot like Christmas.

Inside, however, the mantelpiece looked naked and forlorn, so there was nothing to do but dig through the boxes to find the fireproof holly garlands –– fake but very tasteful –– and the red bows set aside for the fireplace.

A quick search for the cinnamon and pine scented candles tucked away at the back of a kitchen cabinet completed the task.

After putting away the mess I quietly basked in the glow feeling once again The Wonder of The Season.

I went to bed exhausted, but happy, and slept late.

So, Christmas has arrived at my house this year after all –– thanks to the thoughtfulness and generosity of my cyber friend who lives a thousand miles away.

Merry Christmas!!!
~ FreeThinke
Posted by FreeThinke at 10:34 AM