Murrow’s program See It Now focused on a number of controversial issues in the 1950s, but it is best remembered as the show that criticized  Mccarnyism and there'd Scare, contributing, if not leading, to the political downfall of Senator Joseph McCarthy. [McCarthy had previously commended Murrow for his fairness in reporting.]

On March 9, 1954, Murrow, Friendly, and their news team produced a half-hour See It Now special titled "A Report on Senator Joseph McCarthy.” … Murrow used excerpts from McCarthy's own speeches and proclamations to criticize the senator and point out episodes where he had contradicted himself. …

The broadcast contributed to a nationwide backlash against McCarthy and is seen as a turning point in the history of television. It provoked tens of thousands of letters, telegrams, and phone calls to CBS headquarters, running 15 to 1 in favor of Murrow’s indictment of the senator from Wisconsin … 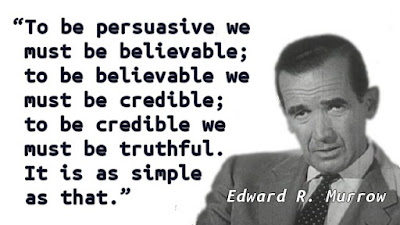 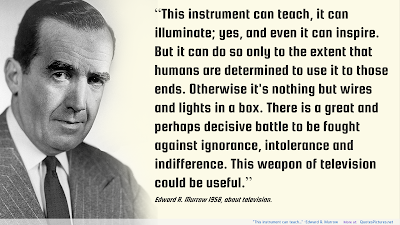 During the early 1960s Sevareid was a common sight on CBS, as moderator of the programs Town Meeting of the World, Years of Crisis, and Where We Stand and covering both political parties' national conventions in 1964. In November 1964, he left New York and returned to Washington, where he became a national correspondent and commentator for CBS. Watergate, a political scandal that rocked the United States during the presidential campaign of 1972 and culminated in the resignation of President Richard M. Nixon two years later, prompted a harsh reaction from Sevareid, who commented in a broadcast on May 1, 1974: "These are men whose minds are irrevocably fixed in the 'We or They' view of life and politics. … They are not interested in destroying their opponent's arguments, but in destroying their opponents, personally… .”

Given the mental climate of journalism of every stripe today I doubt very much if the honorable, serious-minded, straight shooting Eric Sevareid would be permitted to hold a job in the agenda-driven, dog-eat-dog, sensation-mongering jungle the enemedia's brand of attack journalism has created since their triumphant coup d'etat best known as Watergate. The once honorable profession has more openly become a whore for and myrmidon to the crypto-Marxist, Globalist agenda since the heyday of Mr. Sevareid.  The always grandstanding, then-closet-leftist Ed Murrow on the other hand would doubtless be more welcome than ever, and far less reserved were he alive today. After all Murrow was a highly effective  pioneer in the ignoble field.
Posted by FreeThinke at 4:00 AM