GUESS WHO BESIDE THE WASHINGTON POST IS BEHIND THE ALLEGATIONS AGAINST
JUDGE ROY MOORE?

The WaPo is as corrupt, depraved and bigoted a Leftist Partisan Rag as ever existed, and has been at least since shortly after Katharine Meyer Graham's husband, Phil Graham, committed suicide after a short term at the helm of the paper, which had been owned by Katharine Meyer's father Eugene.

I've been privileged to know several socially rominent Old Guard Washngtonians who were alive and fully aware at the time of the Meyer-Graham tragedy, and their consensus was that Phil Graham was a good guy, but rather naive –– a real straight arrow –– who had no idea of the treacherous, power-seeking nature of the woman he married.

Poor Graham got in way over his head, saw no way out, and so commited suicide rather than live with the corruption and subtlely vicious, anti-American conniving that had come to dominate his life with the truly frightful Kay Graham.

Phil Graham had been a figher pilot in WWII, and flew many combat missions in the Pacitic theater. He survived all that with aplomb, but was unable to bear the callouness, calumny, manipulativeness and base seditious motivation of what he found awaiting him at home in his return from the war.

In that respect Phil Graham had, I suspect, a great deal in common with the late Vince Foster.

No One Should Ever Be Convicted of a Crime or Malfeasance on the Strength of Snide Innuendoes, and Unproven –– UNPROVABLE –– Allegations, nor Should Anyone Be Targeted for Professional Extinction Because Someone in a Position of Power and Influence Does Not Admire
His or Her Political Views. 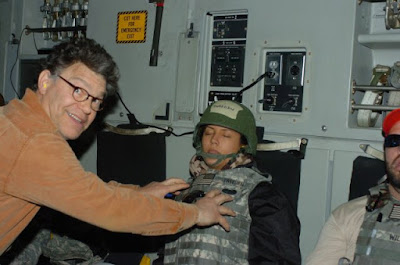 WOO HOO HOO! WELL LOOKEE HERE!
Obnoxious D'RAT AL FRANKEN caught in an act of full-fledged SEXUAL ASSAULT
on an airplane. Franked must be EXPELLED
from the SENATE, right?