A Fair Hearing by a Jury of His Pervs

There’s a lot going on in DC this week, but it seems to be overshadowed by Weinstein case creep –– the penchant for women coming out of the woodwork to accuse high profile men of sexual misbehavior, much of it from decades earlier and most of it unverifiable. Some these allegations are clearly fabrications. That certainly seems to be true of the claims against Roy Moore. On Twitter, Thomas Wictor has made a credible analysis establishing that the one piece of non-testimonial record against Moore, a yearbook notation purportedly by Judge Moore in 1977, is a forgery made with two different inks, and the “D.A.” after his name (at a time when he was not district attorney) are the initials of his law clerk, who signed the court paper used as the forgery template.

Gloria Allred, notorious for sitting with unpersuasive sobbing women as she daubs their tears and peddles incredible tales, repeatedly refused to answer Wolf Blitzer’s questions about whether the signature was a forgery and has said she never even asked her client, Mrs. Wilson, whether she actually saw Judge Moore sign it.

Moore has demanded the yearbook be turned over for forensic examination and Allred says she’ll turn it over only to a (nonexistent) Senate Committee for its investigators to study.

Foolish deflection from a woman as to whom complaints are (as far as I can determine) still pending before the DC and California bars and whose claims in any event, based on her past performances, deserve to be disregarded.

The charge, however, has put Senate Majority Leader Mitch McConnell under fire. Esther Goldberg argues that sex was just the pretext and that Judge Moore is merely a pawn in the fight between Mitch McConnell and Steve Bannon, a repeat of the war they fought against President Trump.

Goldberg’s theme centers on a lead editorial in the Wall Street Journal that describes the Bannonites (as they once described Trump’s supporters) as “cranks and outliers” and attacks them for their agenda of “trade protectionism and slashing immigration,” views Goldberg rightly notes were winning themes in 2016. Like me, she sees the problem with the candidates McConnell and the WSJ would approve of as non-starters:

Problem is that candidates have to get elected first, and the candidates blest by Mitch McConnell and his swamp creatures haven’t been able to do so. And those that have been in the legislature for years don’t seem to be interested in doing any of these things.

Except for that insurgent Donald Trump who’s been busy getting his originalist judges confirmed. Having submitted 105 individuals to vacancies on appeals courts, district courts, and U.S. attorney positions, Trump finally succeeded in lighting a fire under McConnell to speed up the confirmation process in the last few weeks. “They’re waiting forever on line,” said the President. “It shouldn’t happen that way. It’s not right, it’s not fair.”

Roy Moore is only a pawn in this Game of Thrones. The allegations against him are laughable. “We do not want to live in a country or political culture in which every accusation of sexual misconduct is automatically accepted as true,” piously intones the Journal before going on to accept them automatically as true, after a desultory nod to Moore’s right to challenge his accusers “for acts alleged to have happened more than 30 years ago.” Mitch McConnell had no qualms about convicting Judge Moore on the spot, however, the constitutional presumption of innocence be damned. “I believe the women, yes,” he said. This is about as courageous as declaring “I don’t like Nazis.” And as disgustingly superficial and manipulative.

She notes that while McConnell praised Ted Kennedy for being able to separate the “personal from the political” after the latter left a young woman trapped in his car to die underwater, he cannot do that with those who threaten his power even when the best he can do is argue they engaged in some unspecified (and unproven) sexual misconduct” nearly four decades earlier.

In any event, Allred seems to have opened a Pandora’s box. Because now the always vulgar clown Senator Al Franken is under the spotlight for specific sexual misconduct. He’s admitted the most serious charge to date and apologized, but some in his party are demanding that he resign, although at least one self-described feminist has leapt to his defense.

Some on the left even have found (20 years late) words to admit they were wrong in defending Bill Clinton saying he should have resigned over the Lewinsky affair. McConnell appears not to be the only party leader trying to get rid of inconvenient colleagues and former colleagues, using women’s’ tears as weapons. (It’s hard for me to imagine how “I am woman hear me roar” fits in with claims that a pinch on the butt or an unwelcome advance (rejected) can prove a traumatic event of a lifetime.

The suggestion by some that Franken should be subject to a Senate ethics hearing (which Franken actually asked for), drew Iowahawk’s tweet: “He deserves a fair hearing by a jury of his pervs.”

And there’s a basis for that characterization. The Congressional Office of Compliance notes that an unspecified but substantial amount (quotes of $15 million dollars appear to be an exaggeration) has been paid out of a not previously disclosed slush fund (hush fund?) as settlement of Congressional harassment claims –– and this after accusers have had to first undergo lengthy mediation and counseling sessions. The public is entitled to a more specific accounting of these claims.

The enacted Legislative Branch Appropriations bills of 1996 through 2017 have appropriated funds awards, and settlements under the Act. This year alone almost a million dollars of tax money was spent to settle eight such claims.

Now there’s talk about setting up “harassment training for Congress” –– you know, like the idiotic time wasters their laws have imposed on the rest of us. Iowahawk (peace be upon him) will have none of it:

“Forget the stupid "harassment training" fig leaf. If Congress is serious about this, release details of their $15 million harassment slush fund payments, including on whose behalf they were paid.”

While attention is focused on the kind of things of great interest only to viewers of daytime television, strapped to hospital beds and unable to reach a remote to turn it off, some important things are happening.

The House has passed a tax cut bill, which is heading to the Senate, where I hope the harassment training won’t cut into their work time, as it apparently has the U.S. Navy’s operations.

Senator Chuck Grassley has announced he’s going ahead with a confirmation hearing for David Stras, a nominee for the Eighth Circuit Court of Appeals, ignoring Al Franken’s blue slip effort to stop the confirmation hearing, and will as well hold a confirmation hearing for Kyle Duncan for the 5th Circuit, despite his home state senator John Kennedy‘s blue slip. Former senator Harry Reid undid a slew of Senate traditions, and his party paved the way for the new majority to follow his lead. Senatorial courtesy, which once allowed a home state senator to block a nominee from his own state, seems to be a dying tradition.

Rumors are strong that Justice Anthony Kennedy is about to resign from the Supreme Court and the White House has announced five new additions to the slate of potential nominees to fill that slot:

Two of the latest candidates, Judge Amy Coney Barrett and Judge Kevin C. Newsom, were both nominated to their current positions by Trump in May, according to the White House.

The update comes amid ongoing rumors that Justice Anthony Kennedy, 81, who has served on the court for more than 20 years, is considering retirement.

Probably the most important development this week is the effective end of the CFPB (Consumer Financial Protection Bureau), a power grab by Democrats led by Massachusetts Senator Elizabeth Warren, which gives a single director who can only be fired for cause by the president (a structure designed to operate outside Congressional or executive control) power to regulate mortgages, credit cards, and retirement and pension investments –– in sum, all consumer financial transactions. Warren originally wanted to run this outfit, but when it was clear she’d never get Congressional approval, Richard Cordray became the one-man credit czar. Last October the Court of Appeals for the D.C. Circuit ruled that placing so much power in a single commissioner not answerable to the president was unconstitutional.

The Obama Administration sought en banc review by the entire Circuit Court Panel.  In March, the new administration reversed the government’s position. The entire panel heard the case in May. While the decision in that case is still pending, Cordray this week resigned, and the president appointed in his place OMB chief Mike Mulvaney as interim head. Mulvaney strongly opposed the creation of this bureau. The President thus has now put in place someone who can be counted on to undo the Democrats’ machinations to control all our financial transactions by the fiat of a single man. By their own hands, they created a situation they are powerless to undo –– just as by tarring Judge Moore with suspect accusations they open themselves to the same treatment. 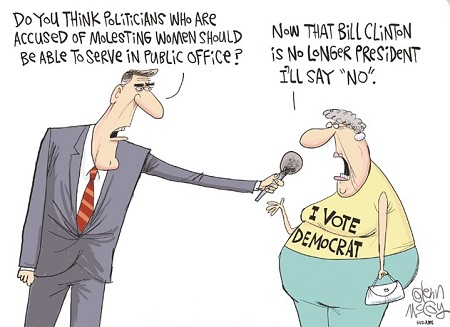