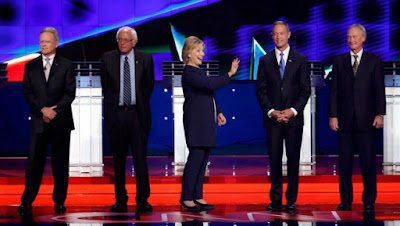 She has perfected her act, was able to sweep aside all negative assertions as to her character and motivation, and was given much support by her closest, supposedly fiercest rival Bernie Sanders.

And we must admit
SHE LOOKED ATTRACTIVE.

Only Jim Webb, rudely treated by moderator, Anderson Cooper, as though Webb were a party crasher, and Lincoln Chaffee, a pleasant-but-fatuous-looking individual who appeared foolish by continually reminding us that he has never been associated with even a hint of scandal in his career seemed mildly at odds with the
CLINTON BOOSTING EVENT.

The Debate Lesson: America Now Has
an Openly Socialist Party