Paul Ryan is discovering that House Representatives
with far better Conservative voting records
than he want the Speakership. 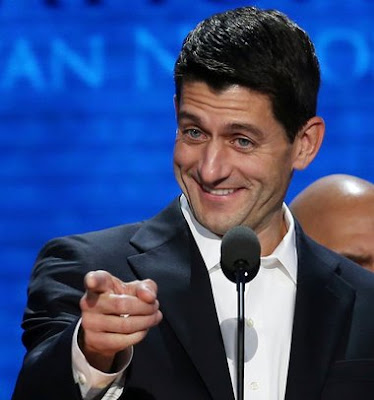 Paul Ryan is Not a Real Conservative

There is much abuzz over Mitt Romney's announcement naming Congressman Paul Ryan from Wisconsin as his vice presidential running mate.
But many see it as unimpressive, and even premature and just another indication of a desperate move to distract from the idea that the "presumptive nominee" has in truth, been fighting for his political life.
A nominee has yet to be chosen at the RNC Convention in Tampa later this month. And some say recent attempts by the Romney campaign to rule-break and manipulate the caucuses in order to steal delegates from other candidates is a glaring indication that Romney himself isn't all that confident.
One noted liberty activist even suggested that Romney had chosen an "imitation Ron Paul".
There are at least two, if not more, factions of tea partiers who will be swelling the ranks of the convention and at separate tea party rallies, and none of them want Romney as the nominee.
Add to that, a new group of social conservatives who have jumped on the 'Dump Romney' bandwagon urging delegates not to vote for Mitt Romney at the convention, even if they're bound to him. (RNC rules say NO delegates are bound) So it looks like Romney recognizes that he will be bracing for a fight.
Asked if the choice of Paul Ryan would make any difference to conservatives, constitutionalists, and tea party types as to whether it would help them come around to get in the Romney camp, most who are familiar with Ryan's record say "not a chance".
Here's why: An evaluation of Ryan's record by the Republican Liberty Caucus in 2008 stated actions that likely would not sit well with small government conservatives. It stated "It appears that when Paul Ryan’s party is doing the spending, raising debt limits, and acting unconstitutionally… Ryan goes with the flow. Congressman Ryan’s actual record leaves much to be desired. The issue Ryan is most known for is his interest in cutting the deficit and balancing the budget. But why did the Congressman vote to bail out the auto industry, to pass the Medicare package to the tune of $400 billion, and to nationalize education via No Child Left Behind?"
Paul Ryan on Bailouts and Government Stimuli
• Voted YES on TARP (2008)
• Voted YES on Economic Stimulus HR 5140 (2008)
• Voted YES on $15B bailout for GM and Chrysler. (Dec 2008)
• Voted YES on $192B additional anti-recession stimulus spending. (Jul 2009)

Congressman Ryan supports the United Nations, the World Trade Organization, federal bailouts, increased federal involvement in education, unconstitutional and undeclared wars, Medicare Part D (a multi-trillion dollar unfunded liability), stimulus spending, and foreign aid.
According to Michelle Malkin in 2009, “[Paul Ryan]"... "hyped as a conservative rock-star" .... "gave one of the most hysterical speeches in the rush to pass TARP last fall; voted for the auto bailout; and voted with the Barney Frank-Nancy Pelosi AIG bonus-bashing stampede." Milwaukee blogger Nick Schweitzer wrote: ‘He ought to be apologizing for his previous votes, not pretending he was being responsible the entire time, but I don’t see one bit of regret for what he did previously. And I’ll be damned if I’m going to let him get away with it’.”
In this attached YouTube video of Congressman Ron Paul speaking to Neil Cavuto, Paul stated he thought Paul Ryan's budget plan "doesn't cut anything of substance". Paul is the only other candidate whose name will appear on the ballot at the RNC Convention and who is seen by many as a breath of fresh air for daring to tell the truth about many issues. Cavuto admitted that Ryan's budget, compared to Paul's, was "mild".
So when it comes to Paul Ryan, I guess you could sum it up this way: "the more things change, the more they stay the same".

[NOTE: Reprinted from the Bedford Patch with permission of the author, Jane Aitken, founder of the New Hampshire Tea Party Coalition.]