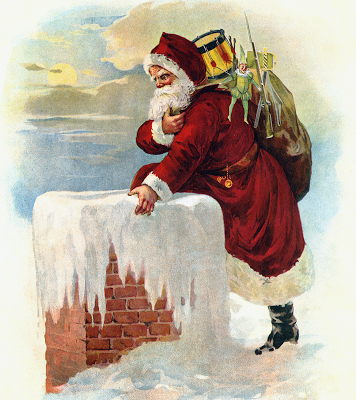 A Ballad of Santa Claus
by Henry van Dyke

Among the earliest saints of old,
before the first Hegira,
I find the one whose name we hold,
St. Nicholas of Myra:

The best-beloved name, I guess,
in sacred nomenclature  ––
The patron-saint of helpfulness,
and friendship, and good-nature.

A bishop and a preacher too,
a famous theologian,
He stood against the Arian crew,
and fought them like a Trojan:

But when a poor man told his need
and begged an alms in trouble,
He never asked about his creed,
but quickly gave him double.

Three pretty maidens, so they say,
were longing to be married;
But they were paupers, lack-a-day,
and so the suitors tarried.

St. Nicholas gave each maid a purse
of golden ducats chinking,
And then, for better or for worse,
they wedded quick as winking.

Once, as he sailed, a storm arose;
wild waves the ship surrounded;
The sailors wept and tore their clothes,
and shrieked “We'll all be drownded!”

St. Nicholas never turned a hair;
serenely shone his halo;
He simply said a little prayer,
and all the billows lay low.

The wicked keeper of an inn
had three small urchins taken,
And cut them up in a pickle-bin,
and salted them for bacon.

St. Nicholas came and picked them out,
and put their limbs together, ––
They lived, they leaped, they gave a shout,
“St. Nicholas forever!”

And thus it came to pass, you know,
that maids without a nickel,
And sailor-lads when tempest blow,
and children in a pickle,

And every man that's fatherly,
and every kindly matron,
In choosing saints would all agree
to call St. Nicholas patron.

He comes again at Christmas-time
and stirs us up to giving;
He rings the merry bells that chime
good-will to all the living;

He blesses every friendly deed
and every free donation;
He sows the secret, golden seed
of love through all creation.

Our fathers drank to Santa Claus,
the sixth of each December,
And still we keep his feast,
because his virtues we remember.

Among the saintly ranks he stood,
with smiling human features,
And said, “Be good! But not too good
to love your fellow-creatures!” 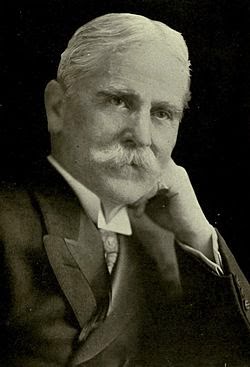 Henry van Dyke was born on November 10, 1852 in Germantown, Pennsylvania, in the United States. He graduated from Princeton University in 1873 and from Princeton Theological Seminary, 1877 and served as a professor of English literature at Princeton between 1899 and 1923.

Van Dyke chaired the committee that wrote the first Presbyterian printed liturgy, The Book of Common Worship of 1906. In 1908–09 Dr. van Dyke was an American lecturer at the University of Paris. By appointment of President Wilson, a friend and former classmate of van Dyke, he became Minister to the Netherlands and Luxembourg in 1913. He was elected to the American Academy of Arts and Letters and received many other honors. Van Dyke was an "ardent foe of the annexation of the Philippines, [and] told his congregation in 1898, 'If we enter the course of foreign conquest, the day is not far distant when we must spend in annual preparation for wars more than the $180,000,000 that we now spend every year in the education of our children for peace.'"

Among his popular writings are the two Christmas stories, The Other Wise Man (1896) and The First Christmas Tree (1897). Various religious themes of his work are also expressed in his poetry, hymns and the essays collected in Little Rivers (1895) and Fisherman’s Luck (1899). He wrote the lyrics to the popular hymn, "Joyful, Joyful We Adore Thee" (1907), sung to the tune of Beethoven's "Ode to Joy"....