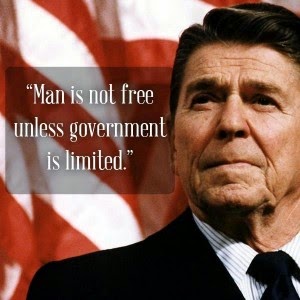 When It Comes to Job Creation, Obama Doesn't Hold a Candle to Reagan
by Brian Dimitrovic
Forbes Magazine
10/09/2012

When Ronald Reagan became president in January 1981, the nation had just endured a recession the year before. Then another recession materialized on Reagan’s watch in a few months’ time, in the fall of 1981.
The labor force participation rate—which measures the proportion of the population at work or looking—had been rising throughout the 1970s, but it took a drop down, to 63.5%, as the latter recession came. Unemployment, at 7.5% when Reagan took office, shot all the way up to 10.8% within a year and a half.
Bad stuff early in Reagan’s first term. Fewer and fewer and people who wanted them had jobs –the increasing unemployment rate. And fewer and fewer people either had or were even looking for work–the decreasing labor force participation rate.
As these malign developments congealed, Reagan was putting together a policy response. This consisted of cuts in all rates of the income tax; a program to soften the effects of governmental regulation on the economy; and encouragement of Federal Reserve efforts not to print too much money.
Well (Ronald Reagan always said, “Well”), that policy sure came through with force. By the time Reagan was running for re-election in 1984, in October of that year, the unemployment rate was back down to 7.4%, basically the same level that prevailed when he had taken office, and well off the 10.8% peak of two years before. And the participation rate was up to 64.4%.
Thus as Reagan made his bid for a second term, in the month before the election, unemployment was decreasing as more and more people were looking for jobs. This meant that there had to be quite a few more jobs in the economy in October 1984 compared to January 1981. Indeed there were: 5.7 million more.
It is uncanny what a comparison can be made with respect to this experience and that of the nation under President Obama.
When Obama took office in January 2009 the unemployment rate was 7.8%, just as it is this month of October 2012 as he runs for re-election, having got as bad as 10% (in 2010). This is essentially identical to the Reagan record: unemployment in the mid- or high-7% range at the beginning and end, with a peak at 10% or just above.
Here’s the big difference. When it comes to the labor force participation rate, under Obama it too fell to a trough of 63.5%, as it did for Reagan, but now it stands at…63.6%.
Therefore, there must be a rather massive difference in job creation—in total employment in the nation. Sure enough, this is true. The number of jobs in the United States is a mere 800,000 more now than when Obama took office. Again, the net gain under Reagan was about 5 million more than that.

As goes policy, just like Reagan, Obama had his big splash. His program was of course rather the opposite on all counts. It consisted in tax rebates and such (as opposed to cuts in marginal rates) coupled with big spending; a waving through of major Congressional efforts at regulation; and encouragement of Federal Reserve money-printing.
Under Reagan, pushing 6 million new jobs; under Obama, little net job creation. Both presidents tried major efforts, one supply-side, one Keynesian, at getting the economy through recessionary periods whose employment and participation issues were the same. One president’s record is of clear success, and the other is of the absence of success.
The standard riposte to all this is to claim that the economic conditions Obama was dealing with were worse than what confronted Reagan. But the numbers belie this argument. The unemployment beginning points, peaks, and participation troughs in both the Reagan first term and the Obama term are essentially identical. So the conditions were, objectively, the same.
Which is to say that Ronald Reagan pursued the superior policy. Surely this is the reason Reagan won 49 of 50 states in the election of November 1984. Reagan got the country out of the problem as it existed: 5.7 million new jobs. The same problem existed early in Obama’s presidency, and thus as the election intensifies today under the auspices of so few new net jobs, that presidency is embattled.

NOTE: To the Army of hypercritical Fault Finders and Refutationists: Yes, I DID notice this article is two years old, and I DO know that the same Forbes Magazine recently reversed its position on Reagan versus Obama and the Economy.