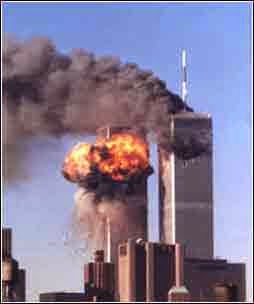 One bright morning, now ten years ago,
No one dreamt, while going off to work,
Lunatics had planned to go berserk
Yielding fury like a lava flow.

A scant ten years –– an amplitude of woe ––
Denial since that demons near us lurk
Enraptured by sheer rage –– sharp like a dirk ––
Craftily whetted in hellfire’s glow.

A grim corrosion followed the attack.
Demented perverts scheme to have us think
Euro-centric values are at fault ––

American prosperity is black ––
Greed and gall have brought us to the brink
Of seeing all we have come to a halt.