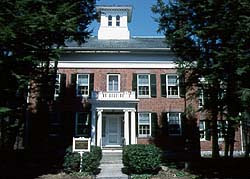 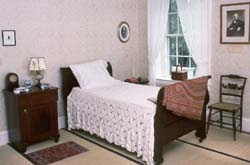 A Pilgrimage to Amherst’

The great American poet, Emily Dickinson may have died in 1886, but even so she has functioned as the Big Sister I never had –– a soulmate –– a confidante –– and an endless source of empathy and inspiration since I discovered her in a high school English class at the age of 14.

I once made a pilgrimage to visit Emily's House and her grave in Amherst. It was March. Snow still lay on the ground. The house was closed to the public, but that turned out to be an advantage. I had the property all to myself, and derived a remarkable sense of oneness with its former inhabitant from walking around her snow-encrusted garden, gazing up at her window. Contemplating which of the trees had been there when she still walked the earth. Quoting her poetry aloud –– and some of mine. Thanking her. Praying for her.

I spent hours there absolutely transfixed. I was in tears much of the time, but it felt good. Probably the closest thing I've ever had to a mystical experience.

If anyone had observed me, they undoubtedly would have thought me insane –– possibly dangerous. Fortunately, I was alone –– a Great Gift. Solitude can make it easier to touch the Heart of Reality more than Confrontation –– or merely pleasant social interaction.

As sunset approached I walked the short distance to her grave –– a modest affair that took me some time to find –– and there I told her once again how much she meant to me. Then I thanked her, and left.

Dinner at The Lord Jeffery Inn –– a place I had known and loved with my parents in my pre-Kindergarten days –– helped bring me back to earth, although the place had remained remarkably unchanged in the nearly-sixty years since I had seen it last, and for a tremulous moment I felt I could see my pretty young mother in her yellow linen suit from Bonwit-Teller's standing next to her suitcase in black and white hound's tooth-checked leather trimmed with light brown alligator skin, and my handsome father in his Glenn Plaid double-breasted suit checking in at the counter.

Another emotional moment, but the excellent dinner I had there proved a comfort, and brought a welcome sense of closure to the experience I'd had that remarkable day.

"Much madness is divinest sense ... " she said. I cannot fail to agree.