A Wealth of Words 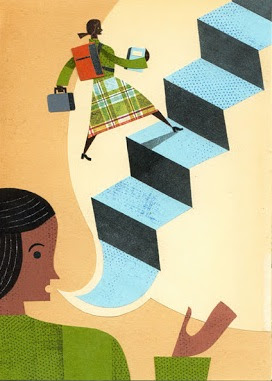 A number of notable recent books, including Joseph Stiglitz’s The Price of Inequality and Timothy Noah’s The Great Divergence, lay out in disheartening detail the growing inequality of income and opportunity in the United States, along with the decline of the middle class. The aristocracy of family so deplored by Jefferson seems upon us; the counter-aristocracy of merit that long defined America as the land of opportunity has receded.

These writers emphasize global, technological, and sociopolitical trends in their analyses. However, we should factor in another cause of receding economic equality: the decline of educational opportunity. There’s a well-established correlation between a college degree and economic benefit.

For guidance on what helps students finish college and earn more income, we should consider the SAT, whose power to predict graduation rates is well documented. The way to score well on the SAT — at least on the verbal SAT — is to have a large vocabulary. The SAT is essentially a vocabulary test.

... Vocabulary size is a convenient proxy for a whole range of educational attainments and abilities — not just skill in reading, writing, and speaking, but also general knowledge of Science, History, and the Arts. If we want to reduce economic inequality in America, a good place to start would be in the classroom devoted to language arts.

Early in the twentieth century, a new concept of education became dominant ... It included optimism about children’s natural development, a belief in the unimportance of factual knowledge, and a corresponding belief in the importance of training the mind through practical experience.

In the 1920s and ‘30s, these ideas began spreading to teacher-training institutions. It took two or three decades for the new ... ideas to revolutionize schoolbooks and classroom practices. The first students to undergo this new schooling process began kindergarten in the 1950s and arrived at 12th grade in the 1960s.

Their test scores showed the impact of the new ideas. From 1945 to 1967, 12th-graders’ verbal scores on the SAT and other tests had risen. But thereafter started to plummet. ... Prior to 1967 test scores had been rising steadily for 50 years. They reached their low point around 1980 and have remained low ever since.

Some scholars thought the precipitous fall of verbal SAT scores simply reflected the admirable increase in the percentage of low-income students taking the SAT. The same decline of verbal achievement, however, had occurred on the Iowa Test of Educational Development — a test given to students, who were 98 percent white and mostly middle-class. The declining effectiveness of American schools appeared to be a leading indicator for shrinking income in the American middle-class. The evidence since strongly suggests this is correct. ...

For 30 years after 1945, Stiglitz observes, economic equality advanced in the United States; after about 1975, it declined.

Later, the sociologist Donald Hayes, showed that the decline of these SAT scores reflected the watering down of our textbooks. Following the lead of literacy scholar Jeanne Chall, Hayes found that publishers, under the influence of progressive educational theories, had begun to use simplified syntax and a greatly limited vocabulary. Hayes demonstrated that the dilution of knowledge and vocabulary, rather than poverty, explained most of the test-score drop.

... Studies examining the Armed Forces Qualification Test (AFQT), which the military devised in 1950 –– a two-part test that predicts real-world job performance most accurately when the verbal score is doubled and added to the math score. ... A gain of one standard deviation on the AFQT raises one’s annual income by nearly $10,000.

Other studies show that much of the disparity in the black-white wage gap disappears when you take AFQT scores — again, weighted toward the verbal side — into account.

Such correlations between vocabulary size and performance are as firm as any in educational research. ... There’s no better index to accumulated knowledge and general competence than the size of a person’s vocabulary. Simply put: knowing more words makes you smarter and gives you greater earning potential. ...

The space where we solve our problems is called “working memory.”

... It’s a small space capable of holding a limited number of items  in suspension for just a few seconds. If one doesn’t make the right connections within that small window of opportunity, one must start over again.  Hence, one method for coping and problem solving is to reduce the number of items that one must try to comprehend at any moment.

The psychologist George A. Miller called that process “chunking.” Telephone numbers and Social Security numbers are good examples. The number (212) 374-5278, written in three chunks, is a lot easier to cope with than 2123745278. The same is true when information of this kind is enunciated.

Words are highly effective chunking devices.  Suppose you put a single item into your working memory — say, “Pasteur.” As long as you hold in your long-term memory a lot of associations with that name, you don’t need to dredge them up and try to cram them into your working memory.  The name serves as a brief proxy for whatever knowledge  will turn out to be needed to cope with your problem. The more readily available such proxies are, the better your ability will be to deal with various problems. ...

... Word-learning occurs slowly through a largely unconscious process.  Consider the word “excrescence.” Few are familiar with it; fewer still encounter it in their everyday lives. Maybe you do know it, but try for a moment to imagine you don’t.

Now suppose you were presented with this sentence: “To calculate fuel efficiency, the aerospace engineers needed an accurate estimation of excrescence drag caused by the shape of the plane’s cabin.”  That single exposure to the word was probably insufficient for you to grasp its meaning, unless you were acquainted with the principles of aerospace engineering. Here’s we see the word in another context: “Excrescences on the valves of the heart are known to be a cause of stroke.” Perhaps now you have a vague understanding of the word? A third example will allow you to check and refine your sense of the meaning: “The wart, a small excrescence on his skin, had made Jeremy self-conscious for years.”

By now, you probably have a pretty solid understanding of the word, and one more encounter in a familiar context should verify your understanding ...

You’ve probably figured out by now that the word “excrescence” means “an outgrowth.”

... The sense of meaning we gain from multiple exposures to a word isn’t a fixed and definite quantity, but rather a system of possibilities that get narrowed down through CONTEXT on each occasion.  ... Almost all the words we know are acquired indirectly as we intuit the gist of each new experience in reading or conversation.

General familiarity with subjects under discussion, of course, increases the possibility a student’s unconscious guesses at the meaning of unfamiliar words are likely to be right.

This evidence suggests the fastest way to expand students’ vocabulary would be through a curriculum that presents new words in familiar contexts. ... Spending lots of time on vocabulary lists unrelated to a particular context is an inefficient and insufficient method of inproving vocabulary. ... A large vocabulary results not so much from memorizing word lists, but from stimulating student curiosity simply by continual exposure to many and varied subjects. ...

To make the necessary school changes in the United States, an intellectual revolution needs to occur in order to undo the vast anti-intellectual revolution that took place in the 1930s. We can’t afford to victimize ourselves further by continued loyalty to outworn and mistaken ideas. Of these, the idea that most requires overturning is the notion that schooling should not concern itself not with the acquisition of mere factual knowledge, which is constantly changing. Instead we need to provide students the intellectual tools needed to acquire and assimilate new knowledge. Typically these include the ability to look things up, to think critically, and to accommodate oneself wit increasing flexibilitly to an unknown and unknowable future. ...

[NOTE: E.D. Hirch’s complete article in its extremely lengthy original form may be found at the following link:]
http://www.city-journal.org/2013/23_1_vocabulary.html

Posted by FreeThinke at 8:26 AM