“Laws are never made till they are broken.”

Kensington Digs In with Ban on "Mega Basements" 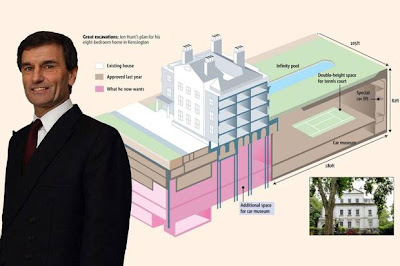 The “iceberg home” mega basements dug three or four storeys into the ground with private cinemas, spas and swimming pools are set to be banned in one of London’s most affluent areas.

New draft rules that will limit basements to a single storey and impose much tighter limits on how far they can extend under a garden were today published by Kensington and Chelsea council.

The move follows a huge surge in applications for basements over recent years as wealthy owners have sought to by-pass planning restrictions on changes to their homes above ground by massively extending their living space underneath.

The subterranean extensions have often outraged local residents because of the noise, dust and disruption caused by digging them out, which can last for up to two years.

One recent application approved by the council came from Chelsea owner Roman Abramovich and his girlfriend Dasha Zhukova.
The couple want to dig out a two-storey basement at their riverside home in Cheyne Walk as part of a £10 million project that neighbours said would “create a dusty mayhem of a sprawling construction site in a peaceful conservation area.”

One of the most notorious applications was by former Foxtons estate agency owner Jon Hunt who successfully submitted plans for a cavernous basement under his home in Kensington Palace Gardens that included a tennis court and a showroom for his collection of Ferraris.

As well as blocking “multi-storey” basements “in most cases” the new draft rules will limit the amount of space that can be taken up under the garden from 85 per cent to 50 per cent; stop basements being dug under listed buildings and require the compulsory installation of pumps to prevent flooding from sewers.

The Tory-run council’s Cabinet Member for Planning Policy, Councillor Tim Ahern, said: “If the cumulative impact of scores of schemes that take months and years to complete is to damage the wider quality of life in our borough I believe we have a right to take that into account. We also need to retain our soakaway areas and for that you need space wide enough and deep enough.  Basements that are storeys deep do not help.”

Planning experts said the clampdown is likely to lead to a temporary rise in applications before the new rules come into effect at the end of the year.

The number of applications has surged in recent years in the borough from just 64 a decade ago to 307 last year.

Greg Hands, Conservative MP for Chelsea and Fulham, said disruption caused by basement digging was now one of the top five complaints in his constituency post-bag. He said: “Basement excavations have caused massive inconvenience to neighbours and other residents.”