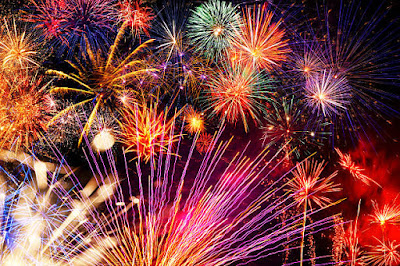 The fountains in the sky in brilliance burst
Over throngs who thrill as patterns spread
In radiant arms of glowing hues disbursed
Natant in the blackness overhead.

Deafening as any cannonade
Explosions follow soon the hiss and squeal --Preliminaries to the star brigade
Erupting floridly, yet quite unreal.

Naumachia was naught compare to this
Delirium. Decorum’s cast aside.
Enraptured like Narcissus we know bliss,
Non sequitur to what’s seen nationwide.

Could joy we take in heaven’s fireworks
Earthbound hold us, while the Devil smirks?

The 1812 Overture by Tchaikovsky
(as transcribed by Igor Buketoff)

IS AMERICA STILL
A NATION?

Pat Buchanan: “Are we passing on
the house we inherited –– or
observing its demolition?”

[NOTE: Pat Buchanan was twice a candidate for the Republican presidential nomination and the Reform Party's candidate in 2000. He is also a founder and editor of The American Conservative.  Buchanan served three presidents in the White House, was a founding panelist of three national TV shows, and is the author of 11 books. His latest is ”]

In the first line of the Declaration of Independence of July 4, 1776, Thomas Jefferson speaks of “one people.” The Constitution, agreed upon by the Founding Fathers in Philadelphia in 1789, begins, “We the people …”

And who were these “people”?

In Federalist No. 2, John Jay writes of them as “one united people … descended from the same ancestors, speaking the same language, professing the same religion, attached to the same principles of government, very similar in their manners and customs. …”

If such are the elements of nationhood and peoplehood, can we still speak of Americans as one nation and one people?

We no longer have the same ancestors. They are of every color and from every country. We do not speak one language, but rather English, Spanish and a host of others. We long ago ceased to profess the same religion. We are evangelical Christians, mainstream Protestants, Catholics, Jews, Mormons, Muslims, Hindus and Buddhists, agnostics and atheists.

Federalist No. 2 celebrated our unity. Today’s elites proclaim that our diversity is our strength. But is this true, or a tenet of trendy ideology?

After the attempted massacre of Republican congressmen at that ball field in Alexandria, Fareed Zakaria wrote: “The political polarization that is ripping this country apart” is about “identity … gender, race, ethnicity, sexual orientation (and) social class.” He might have added – religion, morality, culture and history.

Zakaria seems to be tracing the disintegration of our society to that very diversity that its elites proclaim to be its greatest attribute: “If the core issues are about identity, culture and religion … then compromise seems immoral. American politics is becoming more like Middle Eastern politics, where there is no middle ground between being Sunni or Shiite.”

Among the issues on which we Americans are at war with one another – abortion, homosexuality, same-sex marriage, white cops, black crime, Confederate monuments, LGBT rights, affirmative action.

Was the discovery of America and conquest of this continent from 1492 to the 20th century among the most glorious chapters in the history of man? Or was it a half-millennium marked by mankind’s most scarlet of sins: the genocide of native peoples, the enslavement of Africans, the annihilation of indigenous cultures, the spoliation of a virgin land?

Is America really “God’s Country”? Or was Barack Obama’s pastor, Rev. Jeremiah Wright, justified when, after 9/11, he denounced calls of “God Bless America!” with the curse “God Damn America!?”

With its silence, the congregation seemed to assent.

In 1954, the Pledge of Allegiance many of us recited daily at the end of noon recess in the schoolyard was amended to read, “one nation, under God, indivisible.”

Are we still one nation under God? At the Democratic Convention in Charlotte to renominate Barack Obama, a motion to put “God” back into the platform was hooted and booed by half the assembly.

With this July 4 long weekend, many writers have bewailed the animus Americans exhibit toward one another and urged new efforts to reunite us. Yet, recall again those first words of Jefferson in 1776:

Are we approaching such a point? Could the Constitution, as currently interpreted, win the approval of two-thirds of our citizens and three-fourth of our states, if it were not already the supreme law of the land? How would a national referendum on the Constitution turn out, when many Americans are already seeking a new constitutional convention?

All of which invites the question: Are we still a nation? And what is a nation? French writer Ernest Renan gave us the answer in the 19th century:

“Of all cults, that of the ancestors is the most legitimate: our ancestors have made us what we are. A heroic past with great men and glory … is the social capital upon which the national idea rests. These are the essential conditions of being a people: having common glories in the past and a will to continue them in the present; having made great things together and wishing to make them again.”

Watching our Lilliputians tearing down statues and monuments, renaming buildings and streets, rewriting history books to replace heroes and historical truths with the doings of ciphers, are we disassembling the nation we once were?

Are we passing on the house we inherited – or observing its demolition?