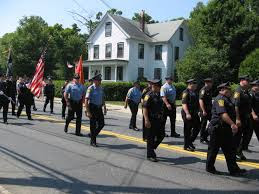 Do you remember the parades? The high school marching bands, the Boy Scouts, the Cub Scouts, and the Brownies all neatly dressed in their uniforms and marching along, sometimes shyly, sometimes proudly, but more often just plain doggedly?

Do you remember the excitement getting ready for The Big Event? Everyone rushing around in the early A.M., mother making sure that everyone got breakfast –– you can’t march on an empty stomach, you know. Dad hanging out the flag on the front porch or from an upper storey window, slightly embarrassed, but privately grateful when Junior points out that it’s hung upside down. There’s just time to put it right before everyone has to be at the starting grounds for the big parade.

Little sister, too young to march, gets the best view, because she’s privileged to sit on Daddy’s shoulder. Later, she’ll shriek with wild delight to the wry amusement of all the parade goers, when she spots her big brother, the Eagle Scout, bearing the standard in front of the whole troop. He’ll turn beet red with self-consciousness when he hears her, and pretend not to notice, but secretly be pleased.

The veterans of two World Wars will march too. They are the real reason for this exciting event. The ancient ones from the First World War, some hobbling on crutches or walking stiffly with canes, wouldn’t miss the chance to march no matter how much effort it might be for them. Uniforms, which no longer fit very well, some even partially eaten by moths, have been dragged out of attics and basements once again to have their brass buttons polished in honor of the day. And there’s always an octogenarian or two who is so proud that his uniform still fits as well as it did in 1916. He will march with his still-handsome head held high, and with an energy that will put all the younger ones to shame. 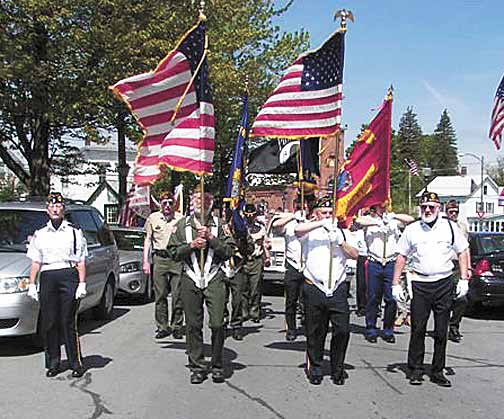 Most of the dads are from the World War Two vintage. They have grown comfortably into middle age, grateful to be here in this land-of-the-free. The horrors of the war they studiously avoid discussing, or even thinking much about, except when an occasional nightmare disturbs their rest, or during those rare, quiet get-togethers with foxhole buddies who actually went through the same experience. At the VFW meetings they pretty much try to concentrate on having good times, and doing good works for the community.

And so, thy marched with pride, with gratitude, and with hope that future generations would not be called upon to make similar sacrifices, so that their families could continue to grow their gardens in peace, and march in future parades and enjoy picnicking with both gratitude and joy.

Later, after the parade, mothers, sisters and aunts would put on the most splendid outdoor feasts. Do you remember the huge bowls of luscious homemade potato salad redolent of onions, peppers, hard boiled eggs, Aunt Mary’s very special homemade mustard, and Hellmann’s Mayonnaise? Sometimes, they added bacon. Surely you must remember the hot dogs and hamburgers, or maybe some ribs and chicken all lovingly and exquisitely marinated with secret spices Dad used before cooking them over white hot charcoal? And all the things to fill it out like Aunt Vera’s carrot raisin slaw and Cousin Jane’s extra special good cucumber salad that even the kids loved to eat, and Mother’s homemade cheesebread –– to say nothing of all the cakes and pies and brownies and stuff.

One year Mother made a spectacular sheet cake that used blueberries and the brightest red strawberries strategically placed on her best white icing to represent the American Flag! The trouble was it didn’t taste near as good as it looked, so we never had it again.


As a famous song says, “These wonderful things are the things we remember all through our lives.”

No one talked about Uncle Bob, who died in a Japanese prison camp less than a month before the war was over, or Cousin Eddie, who walks with a painful limp, because there was no way the surgeons could get all the shrapnel out of his knee.

No one talked about these sacrifices as we put on our innocent and prideful displays, thrilled at the realization that summer vacation was now in sight, and romped and teased and loved each other, –– but we knew.

Somehow, we were aware that all this was not happening just for “fun.” In those long ago days we were taught to be grateful. We were made aware that everything we do has consequences, and that everything –– good and bad –– must be paid for. There were no “free rides,” and no “free lunches,” either.

Sometimes, terrible things happen –– like Uncle Bob’s dying in that prison camp. [We found out later from two of his surviving buddies that they’d inserted slivers of bamboo under his fingernails and set them on fire –– among other things.]

Uncle Bob had been a sweet-natured, happy-go-lucky man. He was the first to come pick you up and fetch the mercurochrome, if you fell off your bicycle, and he adored animals. He was always bringing home a little lost kitten or stray puppy much to Mother’s indulgent dismay. 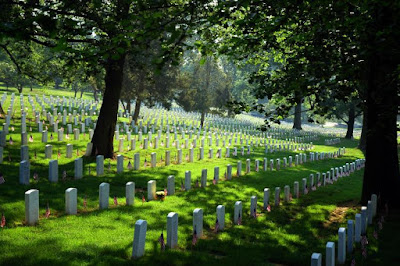 Oh, we still miss Uncle Bob, even though he’s been gone for more than sixty years now, but we’ve always felt that he wanted us to be happy. That was why he went over there and got himself tortured and killed. So we have been happy, but we’ve kept Uncle Bob alive in the love we store in our memories of him, and our gratitude for his courage and sacrifice, and for the swell guy he was whom we were so lucky ever to have known at all.

Should we do less for all those other “Uncle Bobs” who gave their lives so that we might continue to enjoy our picnics? 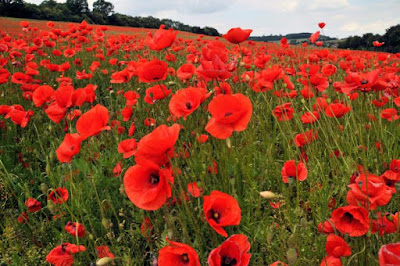 In Flanders fields the poppies blow
Between the crosses, row on row,
That mark our place; and in the sky
The larks, still bravely singing, fly
Scarce heard amid the guns below.

We are the Dead. Short days ago
We lived, felt dawn, saw sunset glow,
Loved and were loved, and now we lie
In Flanders fields.

Take up our quarrel with the foe:
To you from failing hands we throw
The torch; be yours to hold it high.
If ye break faith with us who die
We shall not sleep, though poppies grow
In Flanders fields.