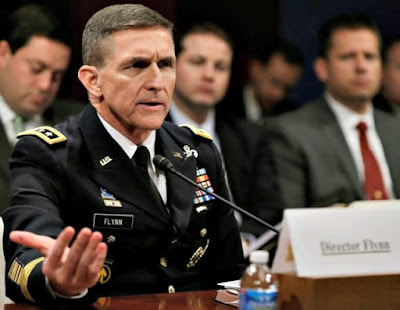 CIA Broke the Law to Take Out its Critic General Flynn

Make no mistake: we have just witnessed an operation by members of the CIA to take out a high official of our own government.  An agency widely believed to have brought down democratically elected governments overseas is now practicing the same dark arts in domestic American politics. Almost certainly, its new head, Mike Pompeo, was not consulted.

Senator Chuck Schumer, of all people, laid out on January 2 what was going to happen to the Trump administration if it dared take on the deep state – the permanent bureaucracy that has contempt for the will of the voters and feels entitled to run the government for its own benefit:

New Senate Minority Leader Charles Schumer (D-N.Y.) said Tuesday that President-elect Donald Trump is "being really dumb" by taking on the intelligence community and its assessments on Russia's cyber activities.

"Let me tell you, you take on the intelligence community, they have six ways from Sunday at getting back at you," Schumer told MSNBC's Rachel Maddow.

"So even for a practical, supposedly hard-nosed businessman, he's being really dumb to do this."

Or, as the old rueful saying has it, "you've got to go along to get along."  This means that we the people had better acknowledge that the bureaucrats have turned into our masters, and the old expression "public servant" is as ironic as anything Orwell came up with.  Schumer knows this and likes it, because the deep state wants a bigger, more powerful government, just as he does.

Note that the law was broken by whoever leaked the transcripts to the media.  Not only is the crime underlying the "scandal" being ignored, but the criminals are being hailed.  On Morning Joe's first hour today, the host, a former congressman (i.e., a lawmaker) himself, called the leakers "heroes."

This interference in domestic politics by the CIA should be regarded as a major threat to our democracy, but of course our Trump-hating domestic media are reveling in a major point scored against the new president.

David P. Goldman (aka Spengler), writing on PJ Media, explains the level of hatred the CIA has for Flynn for daring to take on its spectacular failures:

… the CIA has gone out of its way to sandbag Flynn at the National Security Council. As Politico reports: "On Friday, one of Flynn's closest deputies on the NSC, senior director for Africa Robin Townley, was informed that the Central Intelligence Agency had rejected his request for an elite security clearance required for service on the NSC, according to two people with direct knowledge of the situation."

Townley held precisely the same security clearance at the Department of Defense for seventeen years, yet he was blackballed without explanation. At DoD, Townley had a stellar reputation as a Middle East and Africa expert, and the denial of his clearance is hard to explain except as bureaucratic backstabbing.

... Gen. Flynn is the hardest of hardliners with respect to Russia within the Trump camp. In his 2016 book Field of Fight (co-authored with PJ Media's Michael Ledeen), Flynn warned of "an international alliance of evil movements and countries that is working to destroy us[.]

... The war is on. We face a working coalition that extends from North Korea and China to Russia, Iran, Syria, Syria, Cuba, Bolivia, Venezuela and Nicaragua." The unsubstantiated allegation that he presides over a "leaky" National Security Council tilting towards Russia makes no sense. The only leaks of which we know are politically motivated reports coming from the intelligence community designed to disrupt the normal workings of a democratic government – something that raises grave constitutional issues.

Flynn is the one senior U.S. intelligence officer with the guts to blow the whistle on a series of catastrophic intelligence and operational failures. The available facts point to the conclusion that elements of the humiliated (and perhaps soon-to-be-unemployed) intelligence community is trying to exact vengeance against a principled and patriotic officer[.] ... The present affair stinks like a dumpster full of dead rats.

Note that the suspicions eagerly being raised by the media center on Trump being a pawn of Putin and Flynn secretly pledging fealty or some such absurd subordination.  In other words, suspicions of treasonous behavior by the new president are being cultivated in the general public.  We can expect the media to fan these flames at every opportunity.

Spengler also explains why the Logan Act references are insulting:

Senior officials speak to their counterparts in other countries all the time, and for obvious reasons do not want these conversations to become public. The intelligence community, though, was taping Flynn's discussions, and the transcripts (of whose existence we are told but whose contents we have not seen) were used to embarrass him.

This last point is critical.  The entire "scandal" is based on innuendo.  Flynn tripped over his own feet by misinforming Vice President Pence on the nature of his call and allowing the veep to issue a too sweeping denial of any discussion.  If Flynn had said in his conversation with the Russian ambassador that we will discuss the sanctions after Trump takes office, he might well have told Pence that they did not discuss the sanctions.  And the CIA leakers could have used the appearance of the word "sanctions" in their transcript to brand Pence a liar.  We don't know, and for some reason, nobody is gaining access to the actual transcripts so that we may see the content.  Perhaps the congressional investigations to come will gain access.  But Flynn is now gone, and media memes have been firmly planted in the public mind.

The Flynn Affair is a huge scandal, all right.  But the media are misdirecting our attention toward the lesser dimension while they studiously ignore the real threat to our democracy.