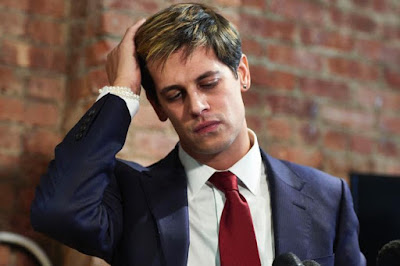 I am a gay man, and a child abuse victim.

I would like to restate my utter disgust at adults who sexually abuse minors. I am horrified by pedophilia and I have devoted large portions of my career as a journalist to exposing child abusers. I've outed three of them, in fact –– three more than most of my critics. And I've repeatedly expressed disgust at pedophilia in my feature and opinion writing. My professional record is very clear.

But I do understand that these videos, even though some of them are edited deceptively, paint a different picture.

I'm partly to blame. My own experiences as a victim led me to believe I could say anything I wanted to on this subject, no matter how outrageous. But I understand that my usual blend of British sarcasm, provocation and gallows humor might have come across as flippancy, a lack of care for other victims or, worse, "advocacy." I deeply regret that. People deal with things from their past in different ways.

As to some of the specific claims being made, sometimes things tumble out of your mouth on these long, late-night live-streams, when everyone is spit-balling, that are incompletely expressed or not what you intended. Nonetheless, I've reviewed the tapes that appeared last night in their proper full context and I don't believe they say what is being reported.

I do not advocate for illegal behavior. I explicitly say on the tapes that I think the current age of consent is "about right.”

I do not believe sex with 13-year-olds is okay. When I mentioned the number 13, I was talking about the age I lost my own virginity.

I shouldn't have used the word "boy" -- which gay men often do to describe young men of consenting age -- instead of "young man." That was an error.

I am certainly guilty of imprecise language, which I regret.

Anyone who suggests I turn a blind eye to illegal activity or to the abuse of minors is unequivocally wrong. I am implacably opposed to the normalization of pedophilia and I will continue to report and speak accordingly.