[NOTE: The following appeared at Diary of a Right Wing Pussycat otherwise known as Kid’s blog on Sunday, September 13, 2015. We reproduce it here with Kid’s permission in edited form - FT]

Because the Left in an unholy alliance with its slavishly devoted Propaganda Machine, often described  here as The Enemedia, have redefined and thus obscured the meaning of the terms Conservative and Liberal we must elaborate on their true meaning. 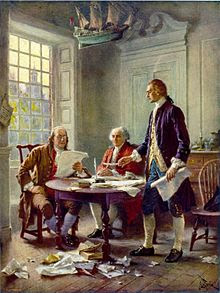 Conservatives believe in following the Original Intent of the Constitution. Do you think the Constitution is an outmoded old rag? Read and understand the Bill of Rights before you send it through the shredder.

The writers of the Constitution were true libertarians. Today we prefer to call them social liberals.  The Founders should best be known as Classical Liberals.  See if you could find anything of significance today in the Constitution that was meant to restrict anyone from doing anything on a personal level.  There was no mention of entitlements, drugs, date rape, marital rape, homosexual activity, prostitution, etc.  Our country was founded on the premise of allowing people to do whatever they wanted, unless their activity became abusive or damaging to others.  If you define yourself as a Liberal and believe in this premise, you might really be a Closet Conservative.

Yes, terrible things were considered acceptable regarding the African Negro race held in bondage in early America, but our thinking evolved, and we wound up fighting the bloodiest, most destructive war in our history first to stop slavery from spreading to newly opened U.S. territories, and to prevent the Southern Slave States from leaving the Union. During that war Republican President Abraham Lincoln freed the slaves forever.

We should realize today that the Democratic Party of the Reconstruction Era was responsible for establishing strict segregation and institutionalized discrimination against the recently freed blacks in the form of the now-infamous Jim Crow laws.

The Republican party was created as a party of reform. Republicans were the social activists of their day. Many were outright Abolitionists. Remember too that Andrew Jackson, a Democrat and the first “Man of the People” to be elected president, was directly responsible for the theft of Cherokee Land and the Persecution and near massacre of the Cherokees known today as The Trail of Tears.

This is not to taken as an endorsement of today’s Republican Party, which appears to all intents and purposes to lack the courage of its convictions and is, therefore, unwilling to give meaningful opposition to the increasingly oppressive Liberal-Democratic Agenda. In this regard the modern GOP may be every bit as destructive as the Democrats have always been –– but especially since they were taken over by the Progressive Movement early in the last century.  Our current government is broken.

Conservatives are not racists, religious fanatics bent on forcing their beliefs on others, neither are they people interested in controlling other people at all outside of expecting obedience to reasonable laws designed to respect the individual rights and freedoms of all as outlined in the Constitution.

Please note that many Republicans are not Conservatives.

If you think things like world peace, social equality, gender equality, economic equality, clean air, water, and soil, humane treatment of animals and all the other similar sane concepts are important, there is nothing wrong with your thinking, unless you believe Conservatives are opposed to these things.  We are not.

All of that is essential to a sane decent society.  We start with these concepts in Kindergarten, then refine the methods of achieving them based on what we must meet in the real world.

Show me someone who is not for any of these things and I'll show you a sociopath.  For example, the megalomaniac in charge of North Korea has no interest in our ideas about how things should be. Tell me how you're going to change this.  Talk to me about the hundreds of millions of Moslems around the world who rejoice every September 11, as they chant “Death to America” and “Death to Israel.” What can and should be done to change their sick behavior?

If you have been subjected to federally-supervised public education and the university system, you have probably been dominated and thus indoctrinated by liberal progressive thinking. In which case you probably still want to believe Socialism is a fair-minded, enlightened alternative to exploitative and abusive Capitalism. If so, you are likely to accept all or most of the tripe dished up by the Enemedia-Government Alliance and the Washington Cartel. If this is the case, as it is with far too many these days, you simply have not developed a capacity for critical thinking.  Instead, you are immersed in a fantasy environment created by wishful thinking.  Now, you may have a good reason for this like being young and wanting to spend your time enjoying life, the freedoms afforded you and even working hard for your future, but sooner or later you are going to have to realize that building a better world is up to you. It cannot be achieved by ceding your freedom to make choices to a supposedly all-wise, all-powerful Central Government.

There seems to be nothing wrong with Marxian Ideals on the surface, but if you fall for the Socialist Utopian Dream Vision, eventually you will be forced to come to the realization that your country and all the good things she once stood for have been taken away from you, and you now live in servitude to an almighty, ever-living, increasingly oppressive, tyrannical State.

Please remember that early on the vast majority of Americans were Classical Liberals (Libertarians).  Most whom we call conservative today were socially liberal at our Founding and for a long time beyond.    Preserving and enjoying Freedom was uppermost on their minds.

Conservatives today realize that in order to fulfill the great potential implicit in our Constitution they must  be willing to take risks and work hard within the confines of Reality in order to deal effectively with today's very complex environment.

Not as many as you like think want "world peace."  It may surprise you to find out how many don't. Nothing worthwhile can be achieved instantly, as if by magic. Fundamental Improvements take a long time, because all factors involved must somehow remain in balance. In attempting to combat one sort of evil through the revolutionary application of main force we too often cause worse problems. For instance, motorized transportation caused air pollution and traffic jams. Solar and Wind farms are killing massive numbers of birds.

There are no  easy solutions.  If it were easy, we'd already be doing it.  Do you honestly want to believe, “greedy business people” sit around rubbing their hands together chortling with glee over the toxic effects their demonically-conceived products are having on the environment, and how adversely they affect the lives of individuals?  Try again.

When I was a kid in the Pittsburgh of the 1950's and 60's when all the steel mills were still flourishing, you could see the particulate pollution drifting down on you with your naked eye.  The Ohio River in Pittsburgh was a toxic, chemical stew.  Chemical plants and many other manufacturers simply poured their waste into the river.  You can't believe how much cleaner everything is today compared to then.  It didn't happen overnight.  It happened over decades. Doubtless the EPA would like you to believe that no clean up of environmental pollution would ever have taken place were it not for their existence, but that is not true. The famous London Fog and vile pollution of the Thames in Victorian England and the poisonous state of New York’s Hudson River below Bear Mountain disappeared largely through enlightened volunteer effort. Pittsburgh’s atmosphere may have improved mostly because the steel mills closed and all those jobs were exported. A modern history of Pittsburgh woud make an interesting study.

No matter how you may wish to describe or define yourself you are sympathetic to Marxian-Communist-Socialist objectives. My advice to you would be to emigrate please to a Socialist Workers Paradise of your choice, and leave US the hell alone.

In closing there are huge things happening in America right now and you will regret not getting involved in trying to shape the direction they may take.  This is reality.  We will have to do our own research and get involved sooner than we probably want to.

For example, if you think watching and reading the “news.” or the last 30 days worth of election debates means you have performed your due diligence in understanding where candidates and political parties stand, you're sadly mistaken.

Because so many swing voters are uninformed, people running for political office are forced to lie just to be allowed to stay in the race.  They have to rely on polls and marketing demographics to attain the number of votes they are looking for in the region where they are running.  For example, John McCain in his last election talked about border security as though he wanted to build a wall one-thousand feet high made of Neutronium on the Southern border.  A nano-second after being re-elected he started talking about Amnesty for all illegal aliens!

Can you see this?  Do you realize how politicians see the vast majority of the voters as gullible, malleable dupes who gladly let their elected representatives get away with promising the moon, while delivering a dirty latrine? Do you want to be one of those dupes?

Do you not understand what it is supposed to mean to have a government Of, By and For the People?  If everyone just lounges around doing whatever he wants after each election, and fails to hold his congress critter accountable, how can you defend that as a valid political system?  I'm not telling you how to vote.  I'm just telling you to put some effort into it, and to follow through afterwards by persistently demanding that your congress members respect and do everything in their power to obey the mandate you were partly responsible for giving them.