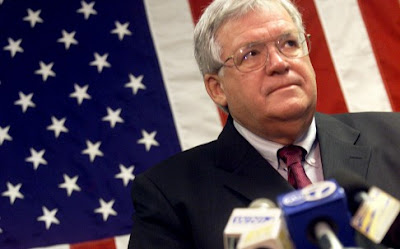 Five Reasons Why the Dennis Hastert Scandal Disgusts Me

1. It looks like the man Republicans turned to as a unifier in the wake of Newt Gingrich being driven from the speakership engaged in homosexual sexual abuse when he was a high school teacher and wrestling coach back in Yorkville, Illinois, prior to his entry into politics. And not just with one boy, whose silence he was apparently attempting to buy, but with at least one other boy. This presumes that prosecutors who have been speaking off the record to the media are telling the truth.
Supporting evidence of this is the very weird telephone call from someone who identified himself as “Bruce,” Hastert received when he was a guest on C-SPAN’s morning call-in show, Washington Journal, a week after the 2014 midterm elections.
"Hello, Denny,” the caller said.
“Do you remember me from Yorkville?” he added, before laughing and hanging up.

This sounds a lot like someone whose life was turned upside down by a homosexual experience with a figure of authority who abused the trust placed in him. This is a seriously heinous crime, like all childhood sexual abuse. Unfortunately, the perps are often charming people who are able to hide their malevolence beneath a veneer of easy-going friendliness. They are, in other words, sociopaths, and capable of doing tremendous damage to others.

Of course, Hastert has not even accused of a crime in this regard. It may not be true, but if it is true, it is disgusting beyond my ability to express.
That said, there are other, loess obvious reasons why this entire affair disgusts me.

3. The reason the whole affair came to light is the Patriot Act-created ability of the feds to monitor cash transactions, and the criminalization of  “structuring” – avoiding mandatory reporting of bank withdrawals of more than $10,000 in cash by withdrawing amounts slightly below that figure multiple times. In other words, taking your own money out of your own bank account is a crime if you act to keep the government’s nose out of your business. The libertarian in me doesn’t like this, though the pragmatist in me realizes this is useful in uncovering terrorist plots and drug dealers. But it seems to me that criminalizing this -- which is what Hastert was indicted on – ought to be contingent on it being related to other underlying crimes. Just keeping the government out of your own business should not be a crime in my book.

4. The FBI and DoJ seem to me to have a slightly odd set of priorities.  There doesn’t seem to be enough manpower to even interview victims of the IRS’s admitted targeting of conservatives under Lois Lerner, who has taken the Fifth Amendment. But tracking down Hastert’s bank withdrawal and devoting God only knows how many resources to bribery at FIFA, which is not an American organization, and which did not commit criminal acts on American soil (only incidentally touched the American banking system), are priorities instead. Sure, I am enjoying the hypocrisy at a sacred cow crooked NGO as much as anyone. But how many agents had to be flown to Zurich? How much expense will be involved in extradition?  I am more concerned about a terrible abuse of the IRS’s awesome powers to target political actors – a crime that threatens the legitimacy of our very democracy – than I am about foreigners bribing other foreigners over sports.

5. I am disgusted that Hastert had a spare $3.5 million available for payoffs to cover his apparent sexual abuse of boys.  That somebody who was a high school teacher and who, at his apogee as a public “servant” (ha-ha) could come up with that kind of scratch tells us a lot about what’s wrong with our political class of both parties. Was it the lucre as a lobbyist, or was it crooked land deals, like Harry Reid? Mollie Hemmingway explains:
This is a man that went from being a high school teacher to an elected official where his top earnings should have been around $174,000. From a Chicago Tribune story in 2006:
Hastert entered Congress in 1987 a man of relatively modest means, worth no more than $290,000. His financial disclosure forms, which provide broad-range estimates, reported that he and his wife held assets totaling between $120,000 and $275,000. The largest: farmland from his wife’s family in southern Illinois and a half-interest in a building in Plainfield, Ill., that had housed his father’s Clock Tower Restaurant. He listed total debts of between $70,000 and $165,000.

The disclosure did not require him to list the equity he had built in his home at the time. But Hastert had just seven months earlier purchased a home in Yorkville for $225,000, Bonjean said. County records show that he had taken a mortgage of $140,000 when he bought the property.

Now his net worth appears to be more than $6.2 million, a figure that his staff does not dispute.
And that was before he retired from Congress to become a lobbyist that helps corporations and government navigate the federal trough.
I am sure that with an election pending, we will get a ton of dirt on Hastert. A great distraction from the Clintons.


"... Forgive us our trespasses as we forgive
those who trespass against us ..."

~ Christ Jesus
Posted by FreeThinke at 12:00 AM