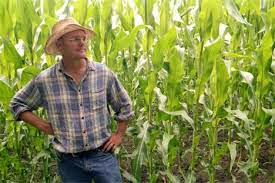 The Disappearance of "The Farmer"

Fellow blogger Z, proprietor of the very popular geeeeeZ, featured a beautifully illustrated video of Paul Harvey’s moving tribute to “The Farmer.” [The late Paul Harvey, whose distinctive voice and manner I remember hearing with fascination on the radio from my days as a toddler back in the 1940’s, was still making daily broadcasts when I was well into my sixties, and continued up until the day he died just a few short years ago in 2009. He stood for something fine and sturdy, and remained a living symbol of Sanity and Stability all his long life. Very sadly his passing has marked the end of an era.]

Z asked if it were still possible for future generations to develop in themselves, and benefit from the splendid, staunch, foursquare, admirably dependable, self-sufficient character of “The Farmer?”

Here is my answer:

Thanks to Industrialization, mass production, and all the modern inventions we regarded as Great Blessings, we also got Mass Communication which brought the Glorification of Vulgarity and Immorality first through Radio, then TV, and now the internet, we no longer plow the fields and scatter the good seed on the land. Instead we work in "Dark Satanic Mills" where regimentation has dehumanized and alienated us.

Industrialization destroyed rugged individualism, and thus made it all-but-impossible to take pride in our work anymore. Because our tasks are now fragmented, we feel no personal association with the finished product, and working on production lines has rendered us robotic as well as moronic -- and deeply resentful.

Thanks to the emergence of Freudian Psychology and the glorification of False Education via the creation of "The Helping Professions," and useless, worthless, purely theoretical fields of non-productive endeavor such as Economics, Sociology, Political Science, and later the degenerate, divisive fields such as Black Studies, Women's Studies, Queer Studies, etc., we have turned away from honest labor and now spend most of our time sitting on our fundaments, getting fat, increasingly lazy, restless,  and fixated on grossly sensual pursuits wondring why we feel so unhappy.

Instead of doing genuine productive work and enjoying real sports, we neurotically pursue artificial "fitness" by joining "gyms" where we grimly "work out" on MACHINES not unlike those found in the dark satanic mills from which every upwardly mobile person has sought to escape.

Endless Criticism and Complaint, increasing emptiness in our conversation, and hostility in our personal and social relationships have become our Way of Life –– our substitute for healthy participation in community affairs, absorbing interest in worthwhile hobbies, and the joy that comes from CREATIVE, PRODUCTIVE endeavor, and pleasant social interaction where The Art of Conversation is practiced over delicious, Home Cooked Meals followed by Card Games or Board Games, joy is taken in Growing Vegetables, Roses and other flowers in gardens we proudly tend, ourselves, and share with friends and neighbors in an attitude of friendly competition.

Sadly, it is no longer possible for people to become "farmers" either in the literal or the metaphorical sense of the word. We have lost much of our virtue for two reasons: 1.The endless pursuit of easier, more comfortable, less time consuming, less demanding ways to perform necessary tasks, 2. Moral degeneration caused by turning away from God and toward Freud and Marx and the increasingly hideous, demoralizing, disgusting, truly wicked public exhibitions that now pass for Entertainment and Culture that have come in the wake of the militantly anti-Christian moguls who not only create and control the Advertising and Entertainment Industries, but also the dissemination of News and Information.

Bearing all this in mind is it any wonder the square, hardworking, thoroughly decent individual represented by the Farmer has all-but disappeared from our society?

Posted by FreeThinke at 9:17 AM