We are sorry the pictures accompanying this article would not reproduce here. The original is linked at the DRUDGE REPORT. At any rate we are very much interested in how this article impresses YOU after you've read it THOROUGHLY. 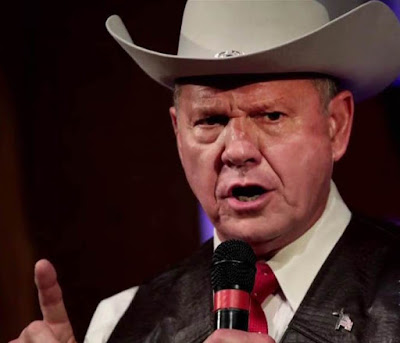 Delray Beach, Fla. — Debbie Wesson Gibson was in her attic hauling out boxes of Christmas decorations last week when she noticed a storage bin she said she had forgotten about. Inside was a scrapbook from her senior year of high school, and taped to a page titled “Those Who Inspire” was a graduation card.
“Happy graduation Debbie,” it read in slanted cursive handwriting. “I wanted to give you this card myself. I know that you’ll be a success in anything you do. Roy.”

The inscription, Gibson said, was written by Roy Moore, the Alabama Republican nominee for U.S. Senate who in recent days has repeatedly denied the accounts of five women who told The Washington Post that he pursued them when they were teenagers and he was an assistant district attorney in his 30s. Since those allegations were published last month, four more women have come forward to allege that Moore made unwanted sexual advances.

The accounts in The Post included those of Leigh Corfman, who said she was 14 when Moore touched her sexually, and Gibson, who said that she publicly dated Moore when she was 17 and he was 34, a relationship she said she “wore like a badge of honor” until she began reevaluating it in light of the accounts of other women, and now, Moore’s own denials.

Shortly after the allegations first surfaced, Moore said in a radio interview with Sean Hannity that he did not know Corfman, but that he remembered Gibson as well as Gloria Thacker Deason, who had told The Post that she dated Moore when she was 18. He called each one “a good girl,” and said that he did not remember dating them.

But at two campaign events in recent days, Moore has backtracked.

At a Nov. 27 campaign event in the north Alabama town of Henagar, Moore said, “The allegations are completely false. They are malicious. Specifically, I do not know any of these women.”

At a Nov. 29 rally at a church in the south Alabama town of Theodore, Moore said, “Let me state once again: I do not know any of these women, did not date any of these women and have not engaged in any sexual misconduct with anyone.”

Gibson said that after finding the scrapbook, she was not sure whether to make it public given the threats she received after publication of the original story. Then she heard what Moore said last week, she said, and contacted The Post.

“He called me a liar,” said Gibson, who says she not only openly dated Moore when she was 17 but later joined him in passing out fliers during his campaign for circuit court judge in 1982 and exchanged Christmas cards with him over the years. “Roy Moore made an egregious mistake to attack that one thing — my integrity.”

A photo of Debbie Wesson Gibson when she was a high school senior, as seen in a scrapbook she kept during her senior year at Etowah High School. (Jon Gerberg/The Washington Post)

The Moore campaign did not respond to numerous requests for comment for this story.

Two of the other women named in The Post article have also pushed back in recent days against Moore.

In an open letter to Moore published on the Alabama news site Al.com after Moore’s Nov. 27 speech, Corfman wrote that “I am done being silent.”

“You sent out your spokesman to call me a liar. Day after day. Finally, last night, you did the dirty work yourself . . .” she wrote. “What you did to me when I was 14-years old should be revolting to every person of good morals. But now you are attacking my honesty and integrity. Where does your immorality end?”

In a statement to The Post after Moore’s Nov. 29 speech, Paula Cobia, a lawyer for Deason, recounted Deason’s vivid memories of dating Moore, from specific restaurants she says they frequented, to the velvet-collared dress Deason says she wore when she says Moore took her to a social function at a Ramada Inn.


“No matter what lies Roy Moore may choose to tell now,” Cobia said, “the truth was the first thing out of his mouth when it came to remembering Gloria.”

Gibson, 54, now lives in Delray Beach, Fla., is a registered Republican, and is the founder of a company that provides sign language interpretation.

Though she said the bulk of her work is in educational, medical and legal settings, her clients have included Democrats such as Hillary Clinton and Joe Biden, and Republicans such as the mayor of Miami. She said that despite requests from dozens of media outlets, she had “very carefully said absolutely nothing” after her account was first published in The Post due to a barrage of threatening hate mail she received, prompting her to notify her local police department. She and the other women have been accused by Moore’s surrogates of lying, or being paid to spread false stories, or being part of a larger political conspiracy to defeat Moore.

Debbie Wesson Gibson shows what she says is a graduation card from Roy Moore. She says he handed it to her during her high school graduation ceremony in 1981. Underneath is Gibson’s own note about what Moore meant to her at the time. (Jon Gerberg/The Washington Post)

Then she found the scrapbook and the graduation card with the slanted, cursive handwriting, which she said immediately reminded her of another woman, Beverly Young Nelson, who had come forward after the Post story was published. In an emotional news conference with the attorney Gloria Allred, Nelson accused Moore of sexually assaulting her when she was 16, and produced what she said was her high school yearbook with an inscription to her from Moore.

“I just couldn’t imagine him doing something like that,” Gibson said. “And then when I saw the interview from Beverly, and I saw his handwriting in her yearbook, my heart just sank. And when I saw what I knew to be Roy Moore’s handwriting, I just began to sob openly.”

Beverly Young Nelson shows her high school yearbook, and an inscription she says was written by Roy Moore, at a news conference on Nov. 13. (Richard Drew /AP)


Mark Songer, a former FBI forensic examiner now with the firm Robson Forensic, examined an image of the graduation card at The Post’s request and said that it “appears to be naturally prepared.” Songer also compared an image of the yearbook inscription to the image of the graduation card and said that “the style of writing, as well as certain letter features, appear to be similar.” He stressed the need for a full and comprehensive handwriting examination to arrive at a final conclusion.

Gibson said she remembers Moore handing the card to her at the Etowah High School graduation ceremony in Attalla, Ala., where Gibson grew up about 10 miles from Moore’s home. She remembers reading the inscription and writing below it: “Roy Moore inspires me because he is such a successful man himself. Also, he is about the only person I know of who seriously believes in me. I appreciate that. He’s got to be one of the nicest people I know.”

As she flipped through the scrapbook last week, Gibson said, she realized it contained other indications of her relationship with Moore, which she says began in March 1981, after he came to speak to her high school civics class.

On a page titled “commencement,” under “My own guests,” she had written “Roy S. Moore,” just above “mom” and “dad.”

On a page titled “remembrances,” she had listed her graduation gifts line by line, including “$10, card” from “Roy S. Moore,” and a check mark indicating she had sent a thank-you card.

Debbie Wesson Gibson points to an entry in her high school scrapbook, where she noted what she says was her first date with Roy Moore. (Jon Gerberg/The Washington Post)


On a page titled “the best times,” she had written: “Wednesday night, 3-4-81. Roy S. Moore and I went out for the first time. We went out to eat at Catfish Cabin in Albertville. I had a great time.” She had underlined “great” twice.

The scrapbook also contained a photo of Gibson as a high school senior, and when she saw it, she said, she thought to herself, “That’s the age I was when I dated Roy Moore, because my braces were off.”

As Gibson previously told The Post, she said that she and Moore dated for a couple of months. She said he kissed her by the swimming pool concession stand at a local country club, that he played his guitar and read his own poetry to her, and that things ended when she went off to college in another part of Alabama, though they still kept in touch.

She said she helped Moore when he was campaigning for circuit court judge in 1982, and remembers tucking fliers under windshield wipers at the Kmart parking lot.

She said that when she became engaged, Moore insisted on meeting her fiance to make sure he was “good enough for me.” She said when Moore was first appointed as a circuit court judge in 1992, she sent him a gavel engraved with his name and a congratulatory note, and that her family and his exchanged Christmas cards some years.

She said that she held Moore “in high esteem,” despite political differences with him, until she began hearing stories from other women who alleged that Moore pursued them as teenagers. She said that at first she did not want to believe the women.

“It takes what I thought was a very lovely part of my past, and it colors it, and it changes it irrevocably,” she said. “It changes it permanently.”

What made her decision to share the documents easier, she said, was watching and re-watching a video she has on her cellphone of Moore speaking last week and deciding that supporting the women who have come forward was more important than staying silent.

“At 34 minutes and 56 seconds into the video, he says, unequivocally, I did not know any of them,” Gibson said. “In that moment, it changed my perspective. I knew he was a liar.”

Woman says Roy Moore initiated sexual encounter when she was 14, he was 32 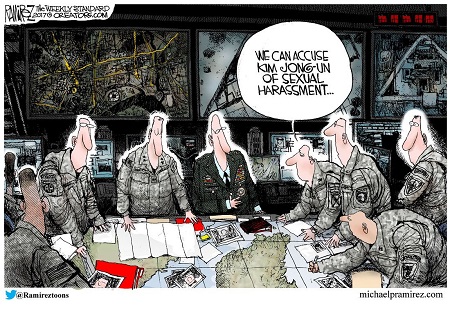 KEEP your BOILERPLATE, STOCK PARTISAN OPINIONS, INSULTS, INVECTIVE and attempts at BADGERING and CROSS EXAMINATION
STRICTLY to YOURSELF.

WE DONT WANT THAT HERE.

Posted by FreeThinke at 2:00 AM