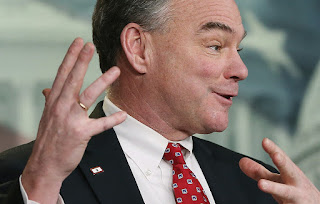 Which Would YOU Choose 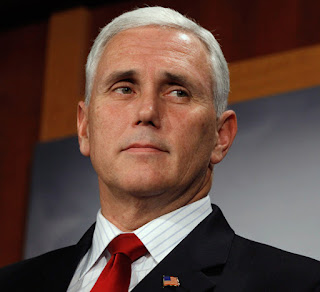 Tim Kaine is a rude, nasty, ill-bred, loudmouth. In short a despicable SHIT.

Mike Pence is positively NOBLE. I don't know how he was able to stop himself from getting up, pulling the bastard up out of his chair by the scruff of his thick neck, and punching his lights out.

Governor Pence was unable to get a word in edgewise most of the evening, because of the constant interruptions from Twerpy Kaine. And when he did manage to eke out a sentence or two, Kaine pulled a Joe Biden by jerking his head head constantly, twitching, smirking, scowling, and keeping much of his body in constant motion.

In stagecraft that's a NO-NO. Actors can get fired for trying it onstage to draw attention away form a central character ––. But, Kaine –– like Biden with Paul Ryan in 2012 ––, has turned the major distraction of rude, clownish, impertinent, indirect physical commentary into a fine art.

The MODERATOR failed completely to perform her role adequately. She seemed unable –– or more likely unwilling –– to govern Kaine's OUT of ORDER behavior, so the Twerp got away with hogging all the attention and sucking most of the oxygen out of the room.  I felt like STRANGLING the bastard, and could hardly make myself stay with this travesty of proper debate procedure. I felt short of breath with indignation the whole time.

ALSO, every time Governor Pence DID manage even to begin making a point the friggin' MODERATOR interrupted him, but she made only the feeblest, ineffectual attempt to reign in the vicious,
demonic Twerp.

It was worse than an interview with Bill O'Reilly. Mike Pence is a perfect gentleman, but I so wanted him to man up and neutralize his OBSCENE antagonist by playing the thug,

Altogether a HORRIBLE, almost unendurable experience, but no doubt the DIRTOCARAT will be declared The Winner, because –– thanks no doubt to the pernicious influence of rock 'n roll, and all its hideous derivatives –– John Q. Publick just loves to witness savage, unbridled CACOPHONY devoid of subtlety and intellectual substance in action.

Pro-WRESTLING is more aesthetically pleasing, and has more socially redeeming qualities to offer than the FILTH dished out by DIRTOCRATS –– may God
damn their souls.

This was not a debate it was a Campaign Speech for Hillary Clinton riding roughshod over every attempt the mild-mannered Mike Pence made to answer the questions put to him.

To review the event in a single word: