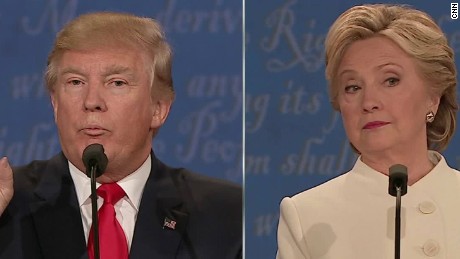 HE: Semi-articulate, limited vocabulary, poor syntax, common "Noo Yawk" guttersnipe accent unfortunate, but may help him appear to be "one of the folk."

HE: Restrained, en pointe (focused), but shambling verbal style, defensive, hangdog aura, works against him. Makes many excellent points, but does it poorly

SHE: Never gives actual answers, responds instead with warmed over segments from campaign speeches, and artfully contrived sound bites. Overall she appears militantly mendacious, truculent, and smug. Worse she perpetually filibusters like an automaton who cannot be stopped till it has finished its scientifically-engineered routine

Chris Wallace was the clear “winner” of the evening. He was fair, kind-but-impartial, considerate, but excellent at keeping the candidates moving along on track without seeming rude or agenda-driven.  BRAVO, Chris Wallace!
Posted by FreeThinke at 5:00 AM