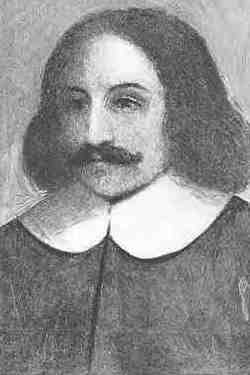 “May not and ought not the children of these fathers rightly say: "Our fathers were Englishmen which came over this great ocean, and were ready to perish in this wilderness but they cried unto the Lord, and He heard their voice, and looked on their adversity, &c. Let them therefore praise the Lord, because He is good, and His mercies endure forever. Yea, let them which have been redeemed of the Lord, shew how He hath delivered them from the hand of the oppressor. When they wandered in the; desert wilderness out of the way, and found no city to dwell in, both hungry, and thirsty, their soul was overwhelmed in them. Let them confess before the Lord His loving kindness, and His wonderful works before
the sons of men.”

Wm. Bradford served as the Plymouth Colony Colonial Governor at different times for over 30 years, from 1621 to 1657. His journal, written from 1620 to 1647, and published as "Of Plymouth Plantation," is credited as the first civil authority to designate the First Thanksgiving on North American Shores. He is considered by historians to be one of the most influential of the Pilgrim settlers for his outstanding leadership, his desire to hold steadfastly to his religious and moral ideals and his determination to keep Plymouth a thriving and independent colony.

At age 12 he heard the sermon of a Puritan minister, Reverend Richard Clyfton, and was greatly inspired by his preaching. He soon joined the Puritan faith who met secretly at Scrooby Manor and in 1607 they severed ties with the traditional Church of England and became known as Separatists.

The Separatists, or Puritans, were subject to religious persecution and many were either fined or imprisoned for religious disobedience. In 1607 the Scrooby congregation attempted to leave England and go to the Dutch Republic of the Netherlands, where freedom of religion was allowed, but they were betrayed by the English sea captain who had agreed to take them there and most of the congregation, including Bradford, were imprisoned for a short time.

The following year he and the congregation managed to escape and settled at Amsterdam, in the Netherlands, where they had to work at low-paying jobs and live under poor conditions. Nine months later he moved with the congregation to Leiden, in an attempt to better themselves.

In 1611 he was able to claim his family inheritance and his living conditions improved. He bought his own house and established a workshop as a fustian weaver, earning a reputable living.

In 1617 the congregation made plans to relocate to America and establish their own colony in Virginia and in July 1620 and with Bradford's assistance they secured financial backing in London to embark on their first journey to America with about 50 people, including Bradford and his wife, on the ship "Speedwell," which was to meet up with the ship "Mayflower" that was transporting non-Separtists who had been recruited for their vocational skills.

The "Speedwell" proved to be unsuitable to make the long voyage and its passengers were put aboard the "Mayflower" for its trip across the Atlantic Ocean. They left England in September 1620 and after two months of extremely harsh sailing conditions, they spotted land (Cape Cod).

Attempting to sail south to reach their final destination in the Colony of Virginia, the ship was rebuffed by strong winter seas and they were forced to return to Cape Cod Harbor. Bradford volunteered to be a member of the exploration party to find a suitable settlement location, eventually choosing present-day Plymouth, Massachusetts.

When he returned to the ship with news of the settlement selection, he learned that his wife had died by drowning after falling overboard. Arriving in Plymouth Bay on December 20, 1620 the settlers disembarked and started building houses. By the following spring almost half of them died from disease. In April 1621 Bradford became governor of the Plymouth Colony upon the death of John Carver and would remain in that position for most of the remainder of his life. Through his faith and perseverance he kept the Plymouth colony alive. He died there in 1657 at the age of 67. - by Wm. Bjornstad (edited by FT)