The Pig and the Rooster 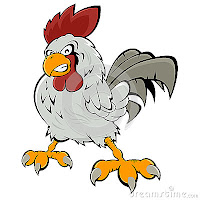 On a warm sunny day, in the midst of July,
A lazy young pig lay stretched out in his sty,
Like some of his betters, most solemnly thinking
That the best things on earth are good eating and drinking.
At length, to get rid of the gnats and the flies,
He resolv'd, from his sweet meditations to rise;
And, to keep is skin pleasant, and pliant, and cool,
He plung'd him, forthwith, in the next muddy pool.

When, at last, he thought fit to arouse from his bath,
A conceited young rooster came just in his path:
A precious smart prig, full in vanity drest,
Who thought, of all creatures, himself far the best.
'Hey day! little grunter, why where in the world
Are you going so perfum'd, pomatum'd, and curl'd?
Such delicate odors my senses assail,
And I see such a sly looking twist in your tail,
That you, sure are intent on some elegant sporting;
Hurrah! I believe, on my life, you are courting;
And that figure which moves with such exquisite grace,
Combin'd with the charms of that soft-smiling face,
In one who's so neat and adorn'd with such art,
Cannot fail to secure the most obdurate heart.
And much joy do I wish you, both you and your wife,
For the prospect you have of a nice pleasant life.'

'Well, said, master Dunghill,' cried Pig in a rage,
'You're doubtless, the prettiest beau of the age,
'With those sweet modest eyes staring out of your head,
'And those lumps of raw flesh, all so bloody and red.
'Mighty graceful you look with those beautiful legs,
'Like a squash or a pumpkin on two wooden pegs.
'And you've special good reason your own life to vaunt,
'And the pleasures of others with insult to taunt;
'Among crackling fools, always clucking or crowing,
'And looking up this way and that way, so knowing,
'And strutting and swelling, or stretching a wing,
'To make you admired by each silly thing;
'And so full of your own precious self, all the time,
'That you think common courtesy almost a crime;
'As if all the world was on the look out
'To see a young rooster go scratching about.'

Hereupon, a debate, like a whirlwind arose,
Which seem'd fast approaching to bitings and blows;
'Mid squeaking and grunting, Pig's arguments flowing;
And Chick venting fury 'twixt screaming and crowing.
At length, to decide the affair, 'twas agreed
That to counsellor Owl they should straightway proceed;
While each, in his conscience, no motive could show,
But the laudable wish to exult o'er his foe.

Other birds, of all feather, their vigils were keeping,
While Owl, in his nook, was most learnedly sleeping:
For, like a true sage, he preferred the dark night,
When engaged in his work, to the sun's blessed light.
Each stated his plea, and the owl was required
To say whose condition should most be desired.
It seem'd to the judge a strange cause to be put on,
To tell which was better, a fop or a glutton;
Yet, like a good lawyer, he kept a calm face,
And proceeded, by rule, to examine the case;
With both his round eyes gave a deep-meaning wink,
And, extending one talon, he set him to think.

In fine, with a face much inclin'd for a joke,
And a mock solemn accent, the counsellor spoke --
''Twixt Rooster and Roaster, this cause to decide,
Would afford me, my friends, much professional pride.
Were each on the table serv'd up, and well dress'd,
I could easily tell which I fancied the best;
But while both here before me, so lively I see,
This cause is, in truth, too important for me;
Without trouble, however, among human kind,
Many dealers in questions like this you may find.
Yet, one sober truth, ere we part, I would teach ––
That the life you each lead is best fitted for each.
'Tis the joy of a cockerel to strut and look big,
And, to wallow in mire, is the bliss of a pig.
But, whose life is more pleasant, when viewed in itself,
Is a question had better be laid on the shelf,
Like many which puzzle deep reasoners' brains,
And reward them with nothing but words for their pains.
So now, my good clients, I have been long awake,
And I pray you, in peace, your departure to take.
Let each one enjoy, with content, his own pleasure,
Nor attempt, by himself, other people to measure.'

Thus ended the strife, as does many a fight;
Each thought his foe wrong, and his own notions right.
Pig turn'd, with a grunt, to his mire anew,
And He-biddy, laughing, cried –– Cock-a-Doodle-Doo!